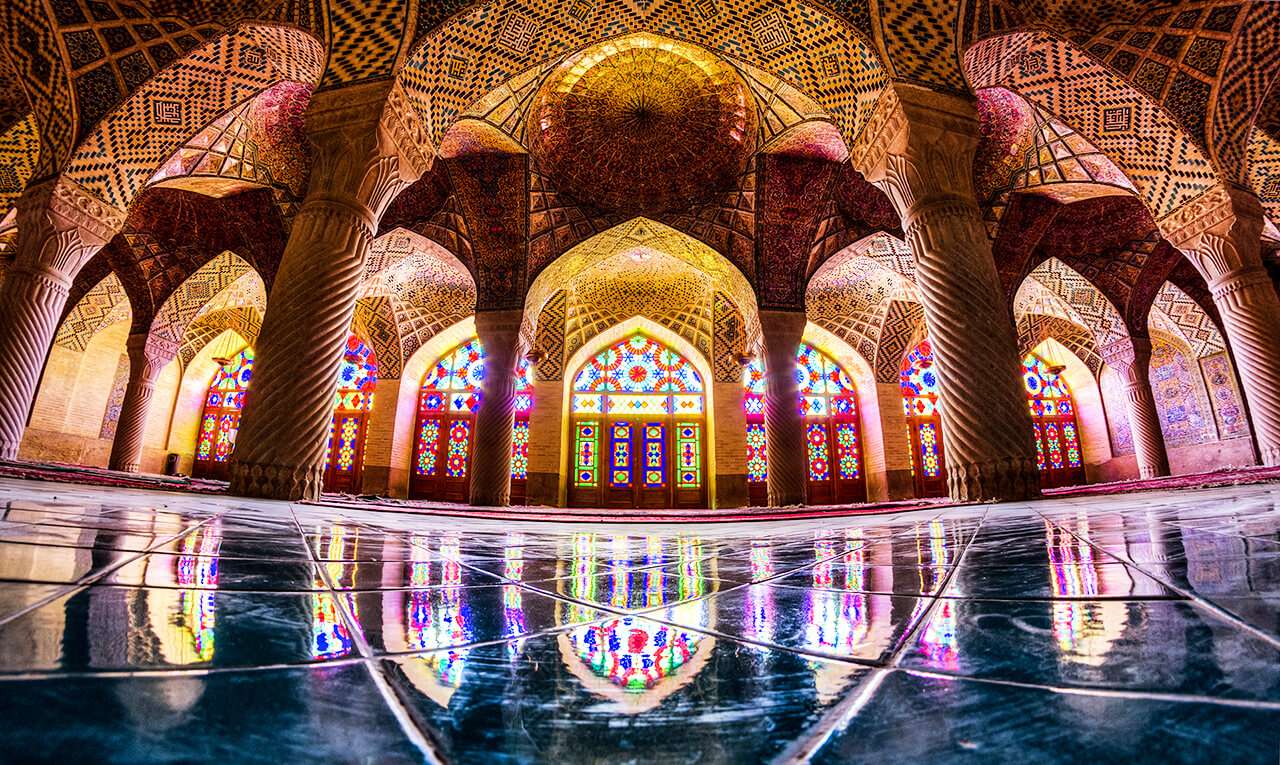 Visiting the iconic Qajarid mosque of Nasir al-Molk built in the 19th century. The mosque is also known as the “pink mosque”, due to its pink tile decorations. 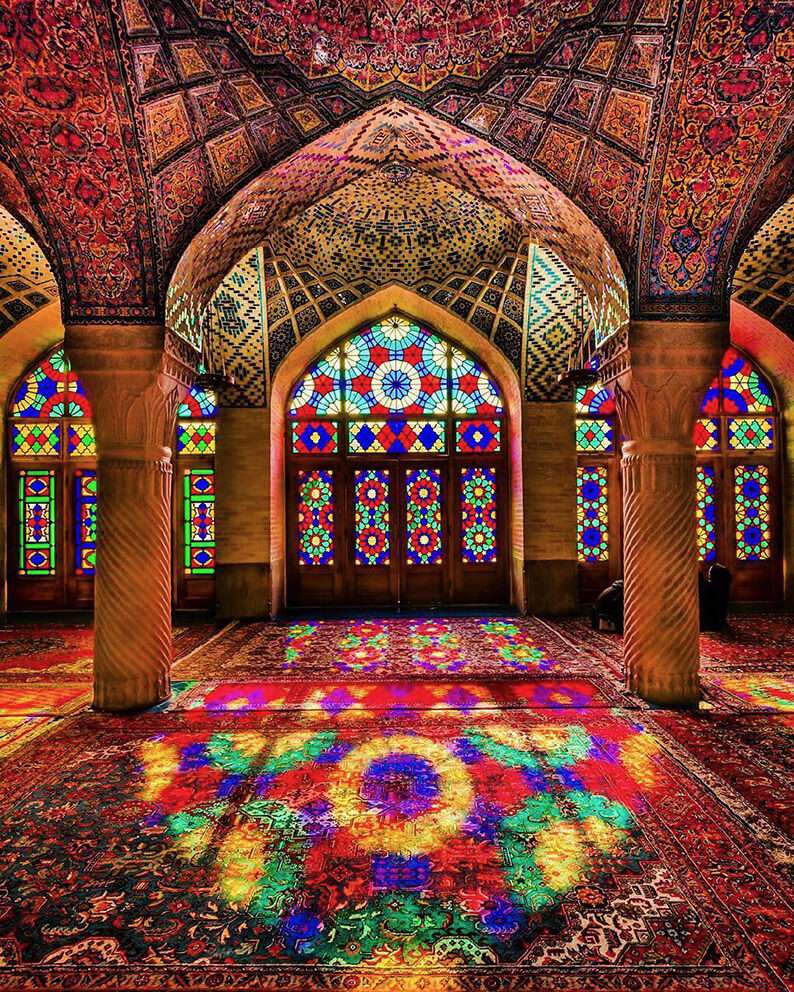 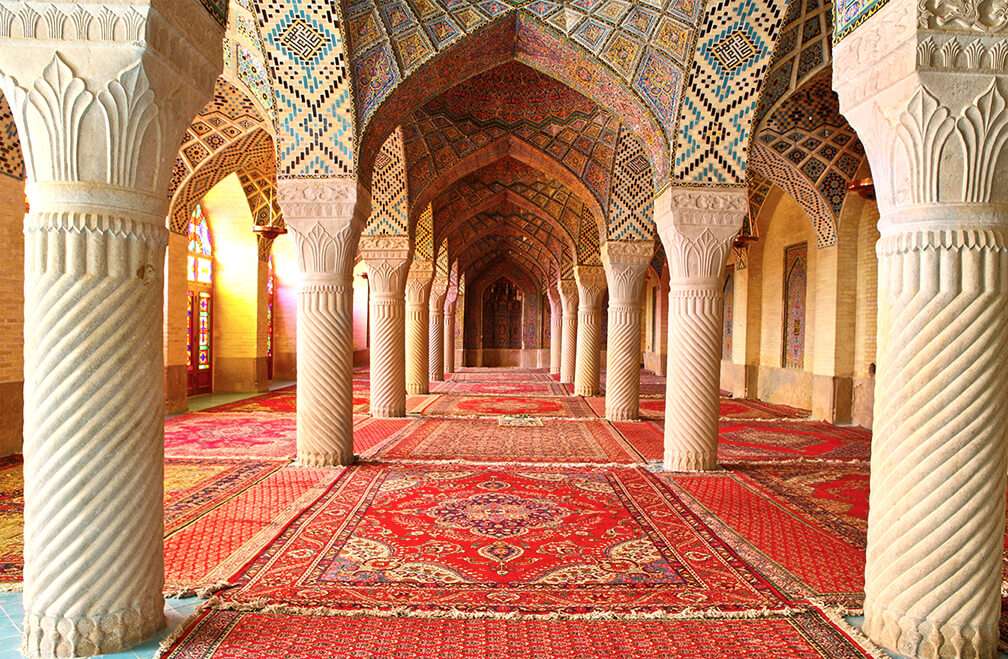 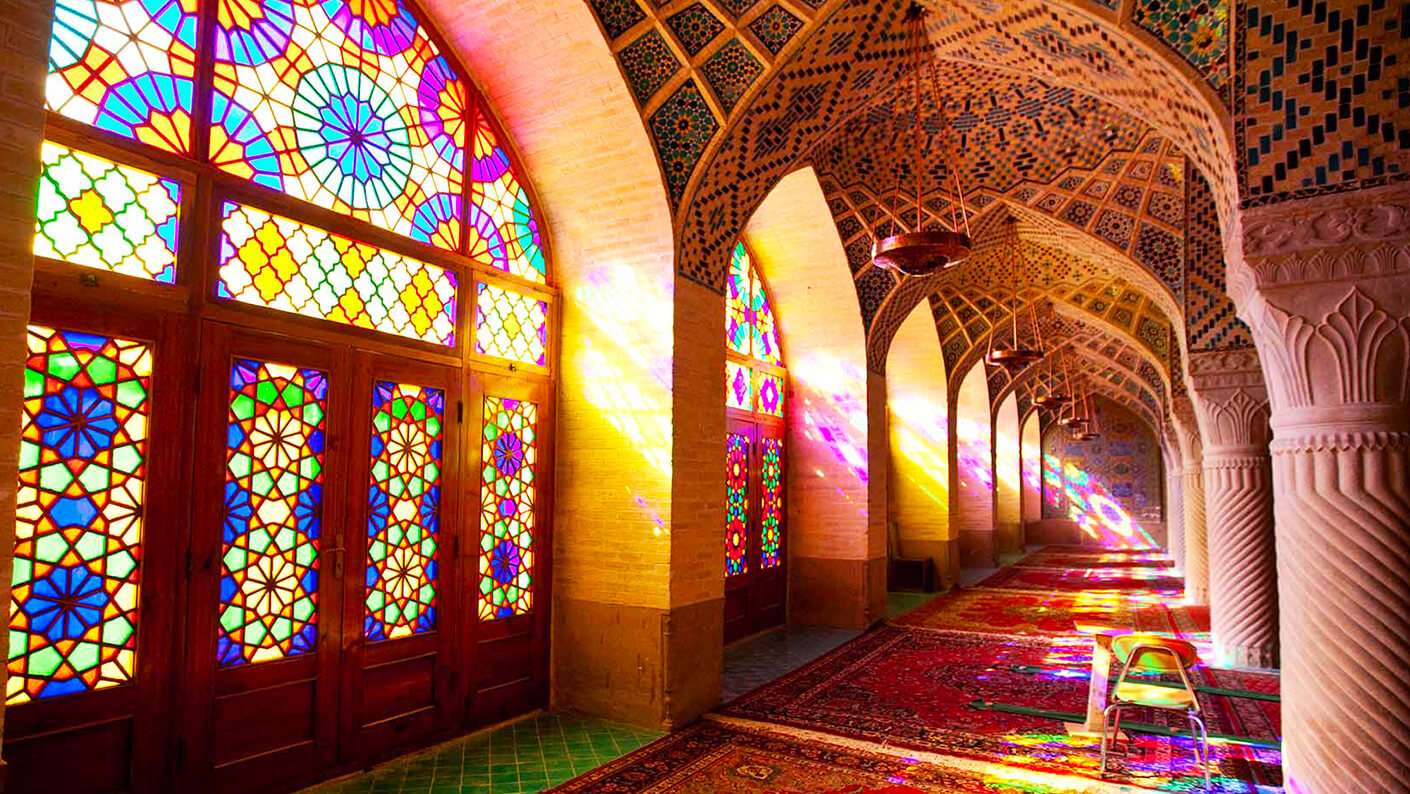 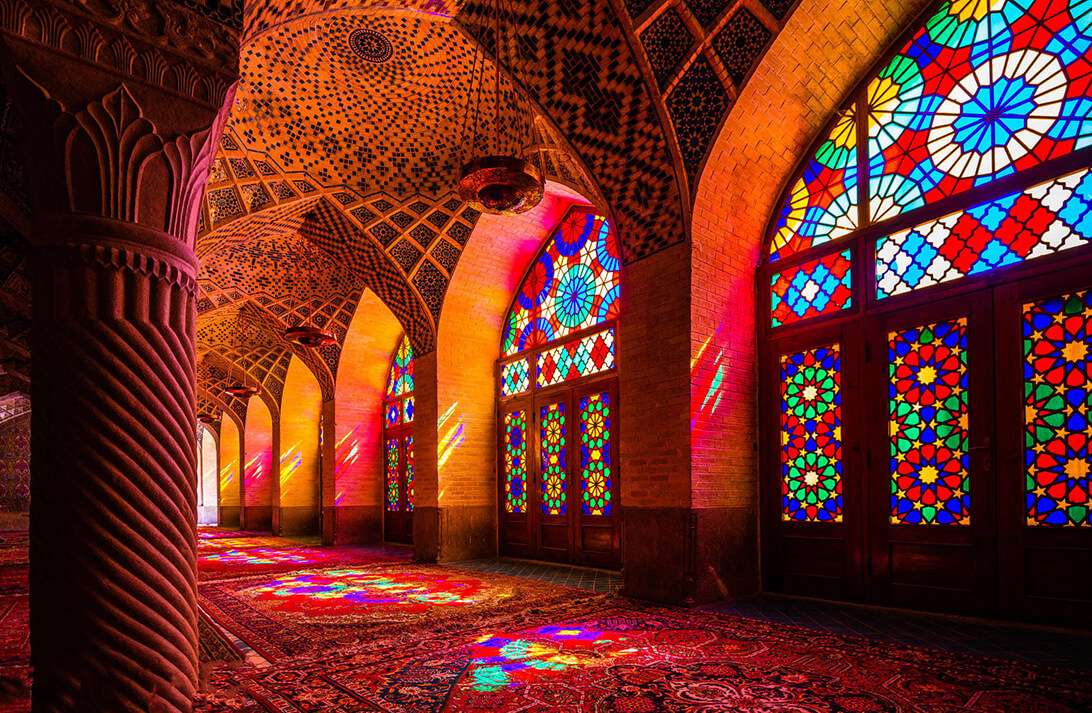 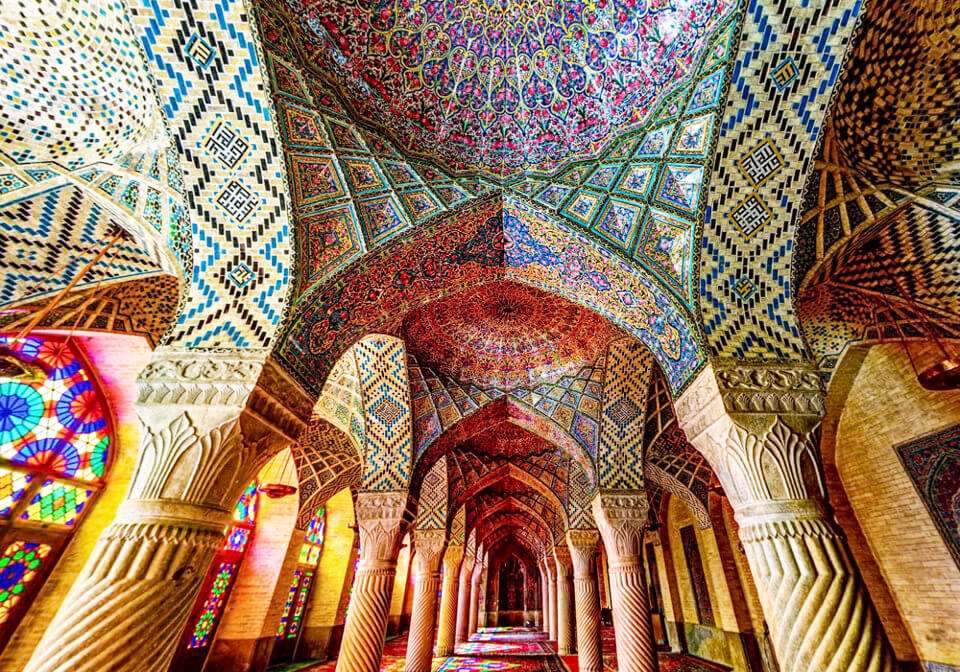 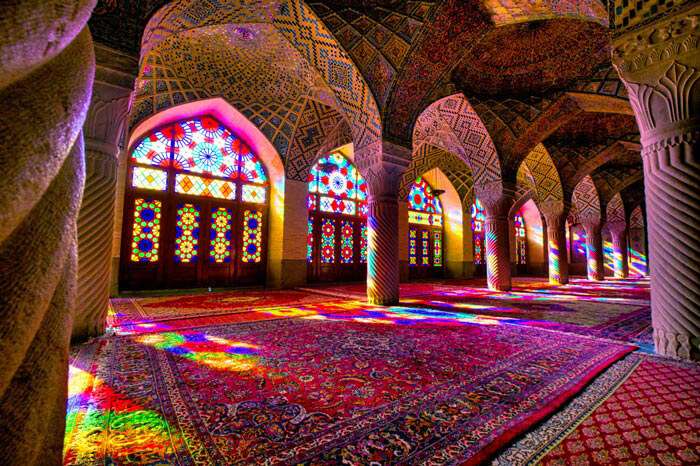 Nasir al-Mulk mosque, also called “Mosque of colors,” the “Rainbow Mosque” and most notably the “Pink Mosque”, was constructed along with a bathhouse, a school, and a cistern. Construction of this Qajarid complex took about ten years (1876-1887) and was carried out by Haj Mohammad Hassan, with the command of Mirza Hasan Ali Nasir al-Mulk, the third son of Qavam al Molk. The latter was the ruler of Fars and enjoyed the trust of the Qajar court.

Although the mosque was constructed in the Qajar period (1785 to 1925), it follows some of the architectural forms of the Zand era (1751-1794). Its main entrance is located on the west of the northern side of the complex. It is a rectangular portal with a large wooden door in the middle of an arch and stands in an asymmetrical relation to the building. A poem by Shurideh Shirazi, a 19th-century poet from Shiraz, is written on the marble stone installed over the door. On the front wall of the vestibule upon entrance, there is a two-line poem by Saadi inscribed over the names of the mosque’s architects and the date of its construction.  The vaulted vestibule following the portal leads visitors to a rectangular courtyard. In the middle of the courtyard, there is a rectangular pool aligned with the north-south direction. Two porches rise on either end of the pool, and two prayer halls stretch along its sides. Tholth inscriptions on marble stone can be traced all around the courtyard walls and dados.

Unlike the typical architectural tradition of the Iranian mosques in which the southern side of the mosque is more elaborate because of pointing to qibla, the northern porch is more lavishly decorated. The northern porch is flanked by two-storey arches, decorated entirely with polychrome faience. The central Pearl vault is surrounded by several vaults adorned with unique tiled stalactites (Muqarnas). The northern side of the building stretches far back into a mihrab. However, the building on the southern side is simpler; it consists of six niches organized on two sides of a central niche which incorporates the mihrab. This porch is flanked by two tiled minarets.

The western prayer hall is finely decorated with brickwork and colorful pieces of glass. It holds an iconic tiled altar and 7 stained glass doorways inviting a gentle light inside, and 12 spiral stone columns supporting its vault. Twelve and seven are sacred numbers for Iranians who are used to adapting sacred numbers in the construction of mosques. The decorations and stonework of this prayer hall are inspired from Vakil Mosque. The walls of the hall are finely tiled; notably, the central aisle is decorated with Qajar era floral patterns in pink, yellow, blue and white tiles.

The light plays an important role in Iranian traditional architecture. Throughout the day, you can see a magnificent, exceptional play of light and colors in this prayer hall.

The eastern prayer hall, or the winter hall, is decorated with Quranic verses and tiles in floral patterns.  Its ceiling, laid on seven columns, is adorned with Maqeli tiling; a combination of brickwork and tiles. This prayer hall now houses the exhibition of objects belonging to the Nasir al-Mulk Endowment Foundation.

There are two wells behind this prayer hall which used to provide the water needed for religious practices.  The water was pulled out, from the 60 m deep wells, by two cows and kept in a water reservoir.