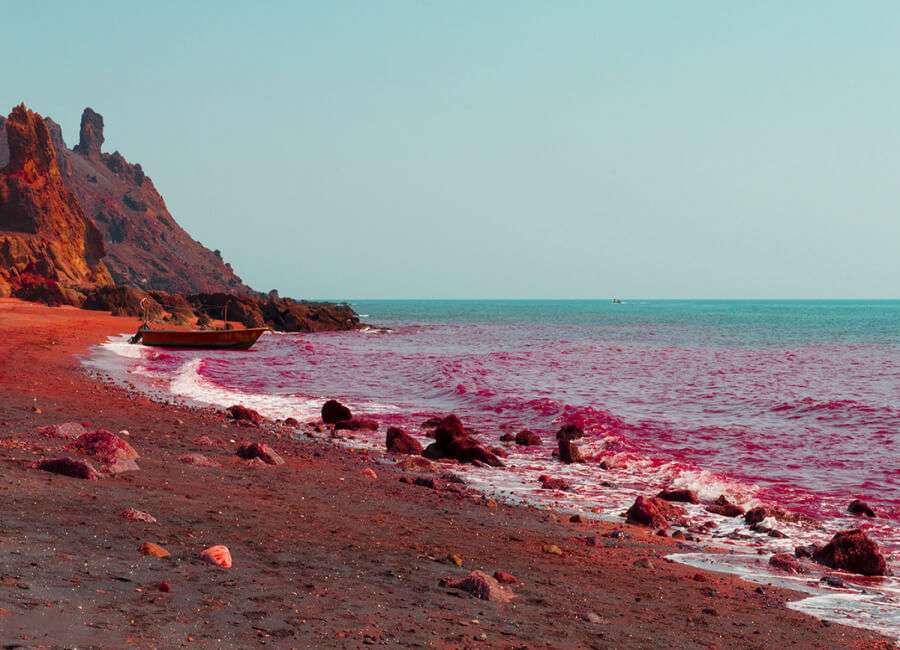 Visiting the multi-colored Island of Iran in the heart of Persian Gulf featuring:

Rainbow Valley – the awesome colorful landscape on the Hormuz Island,

Valley of the Statues – the stunningly sculpted rocky structures in the south of Hormuz Island,

The museum and gallery of Ahmad Nadalian – an internationally recognized environmental artist,

Photos of the A Guide to Visiting Rainbow Island (Hormuz) 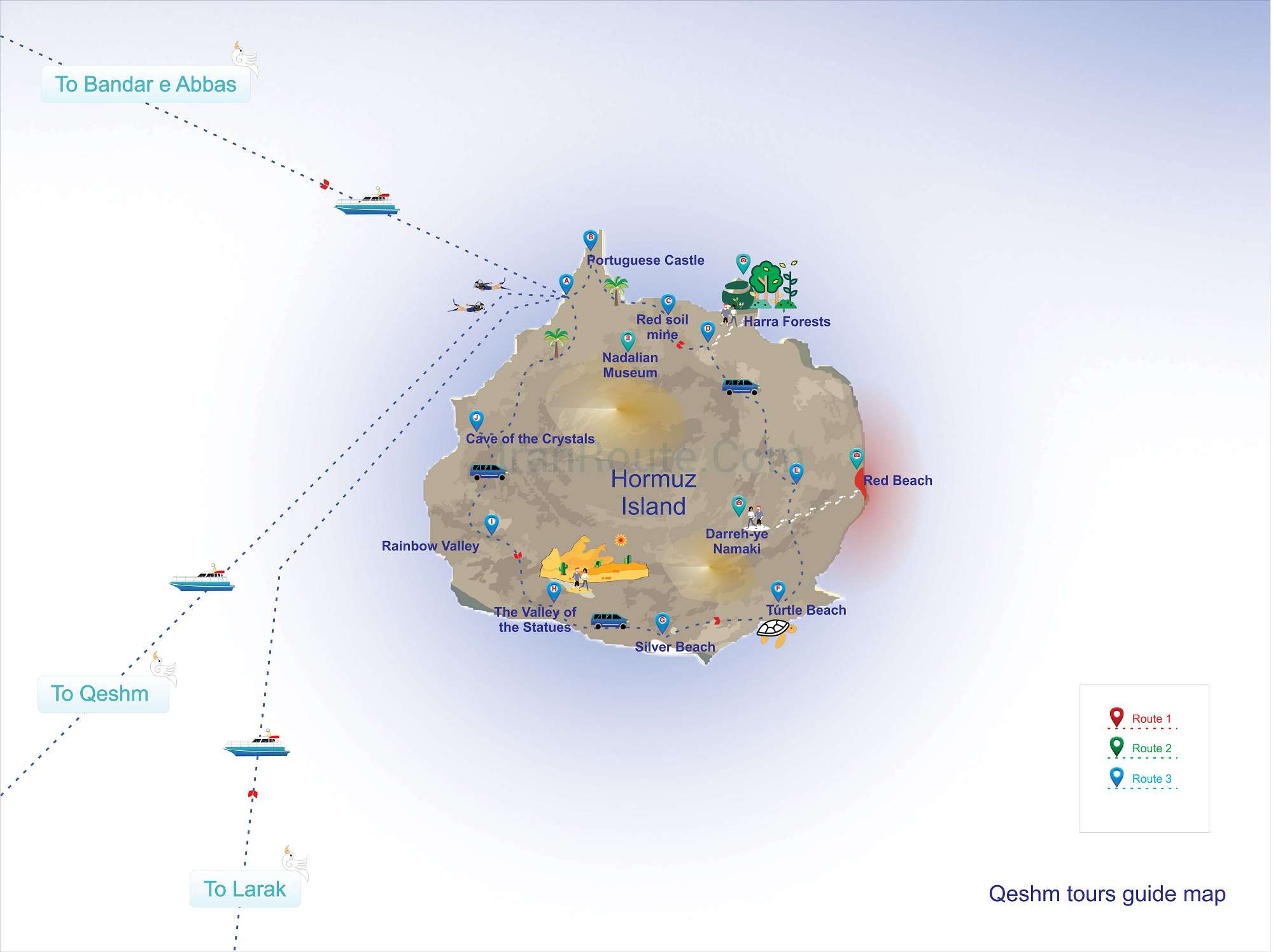 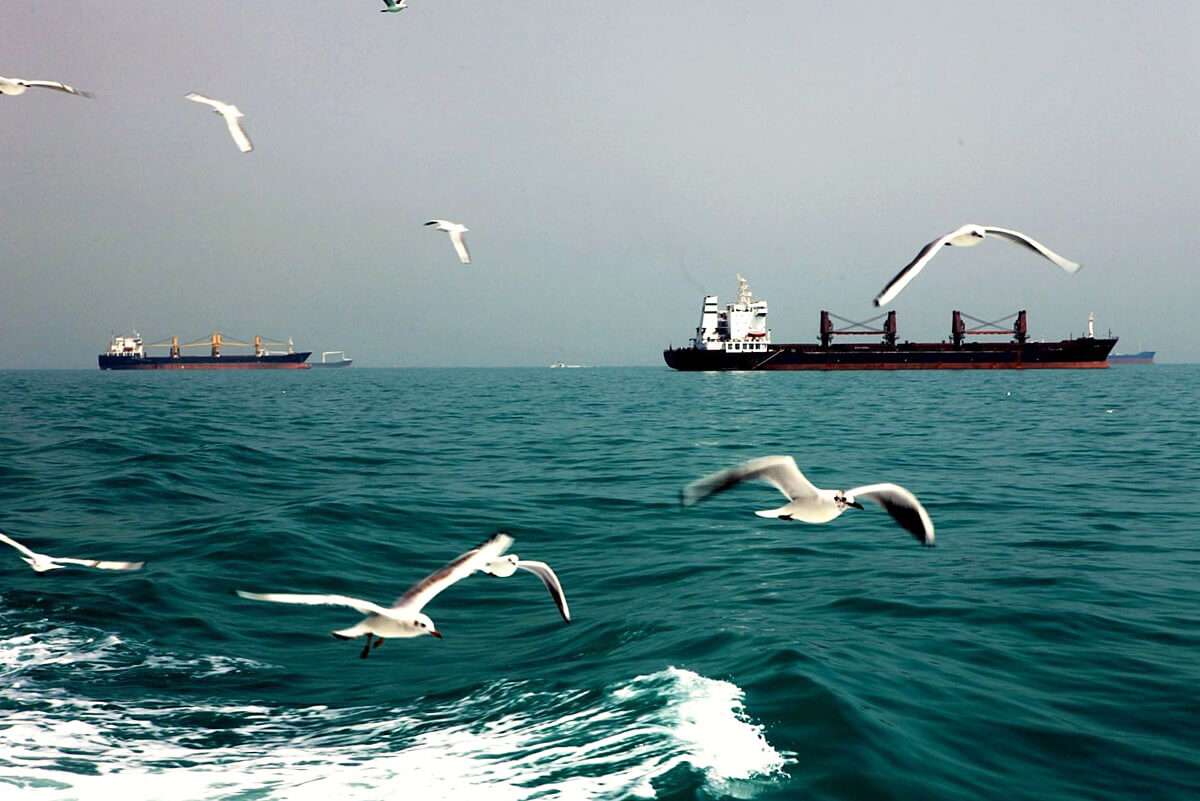 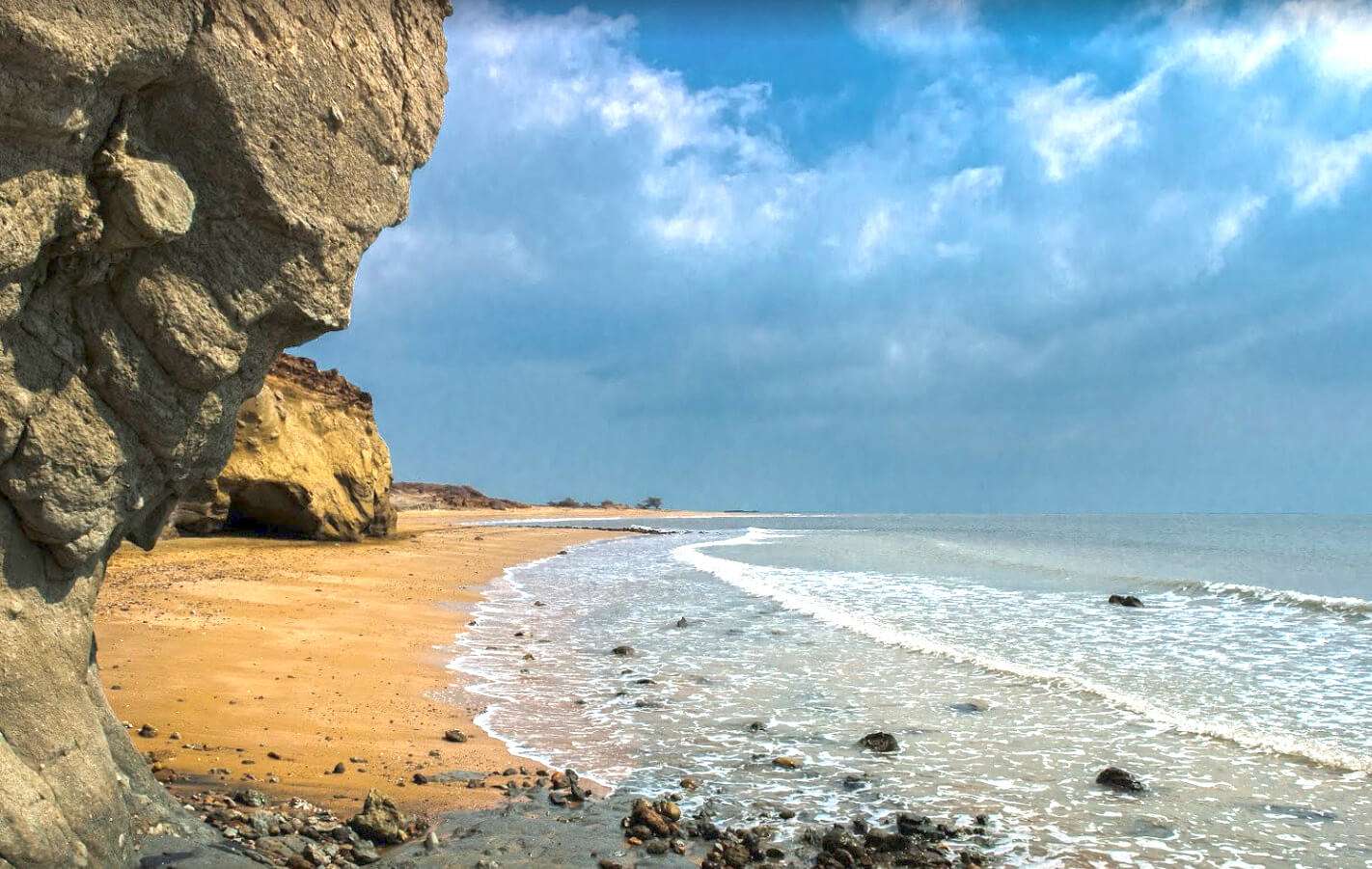 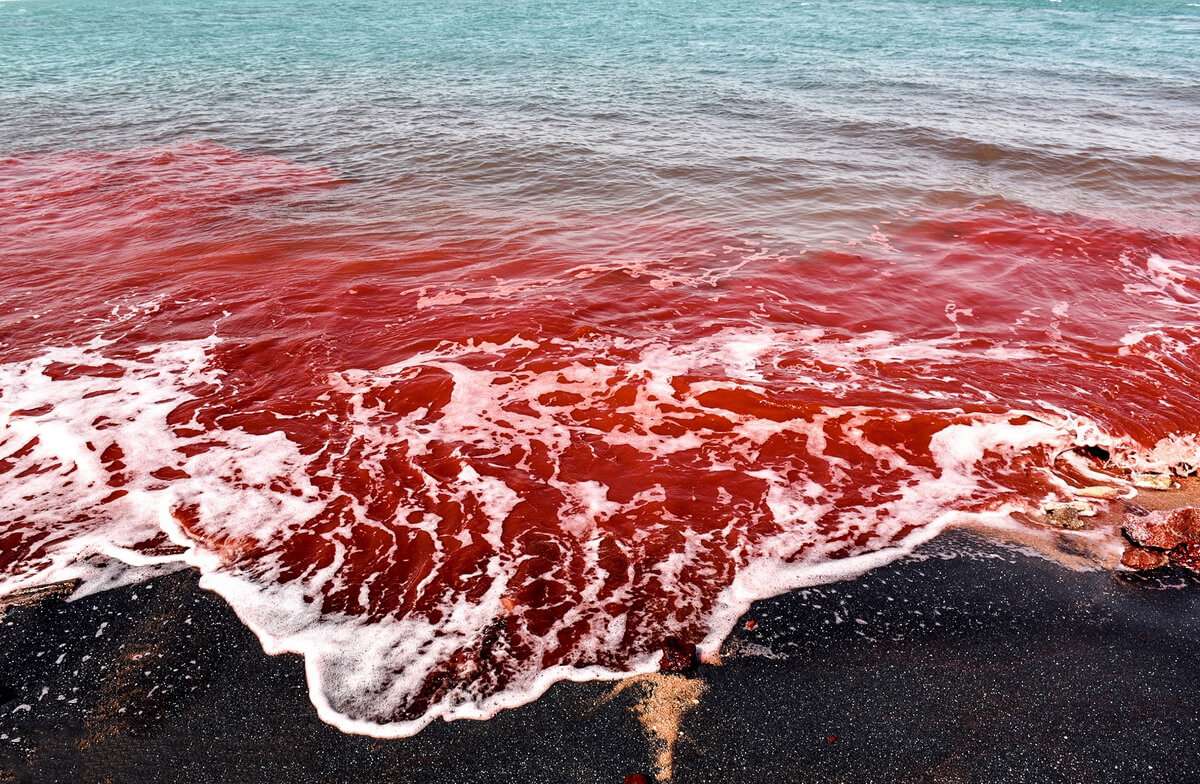 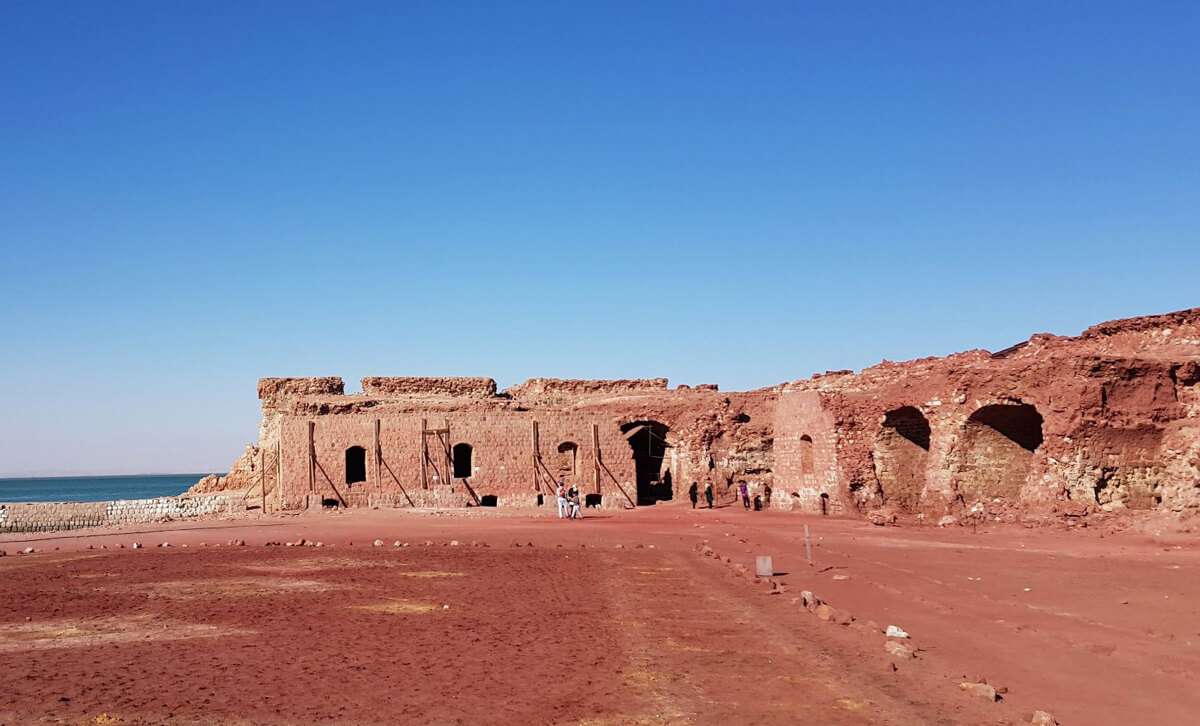 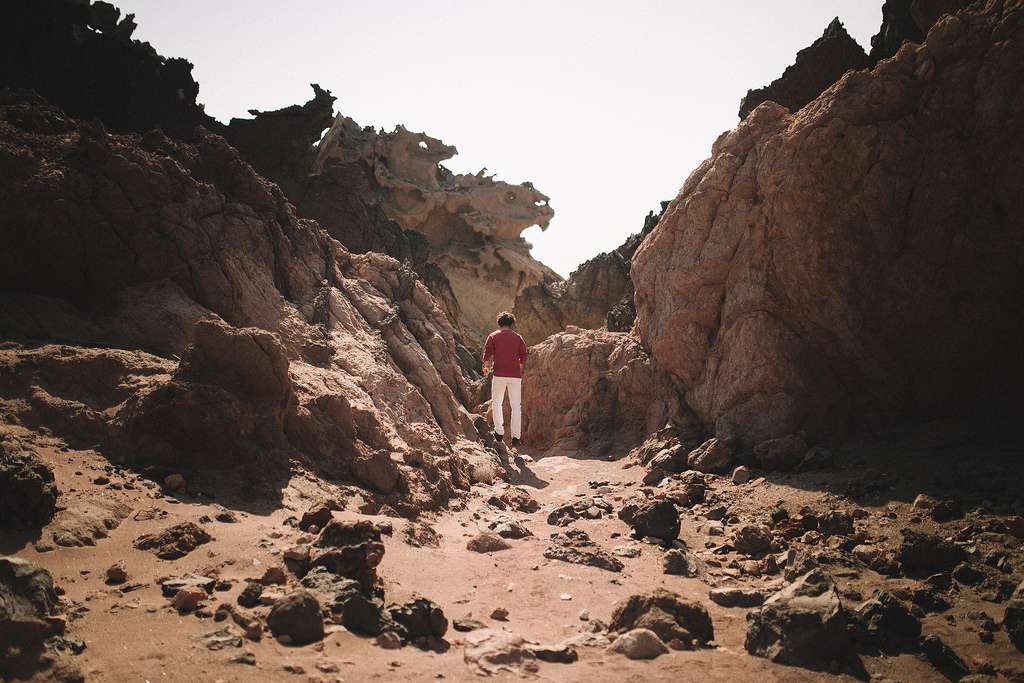 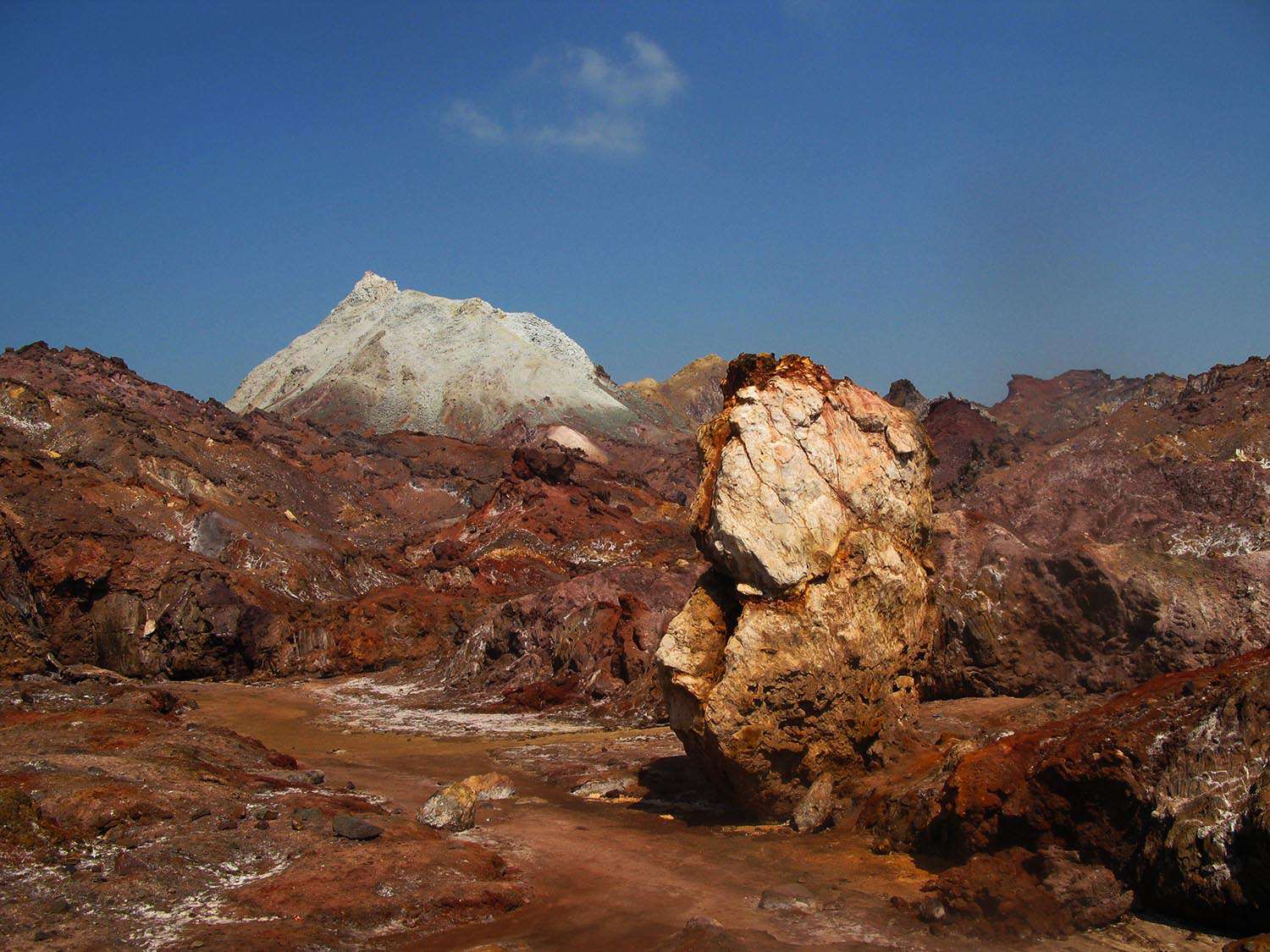 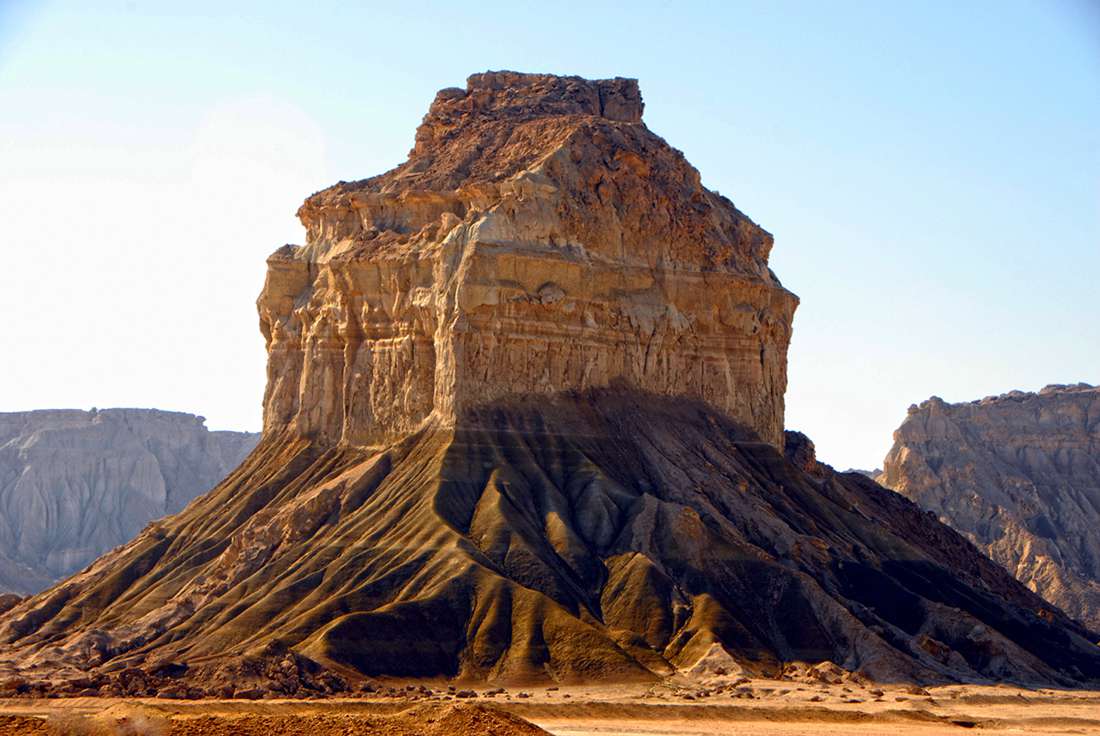 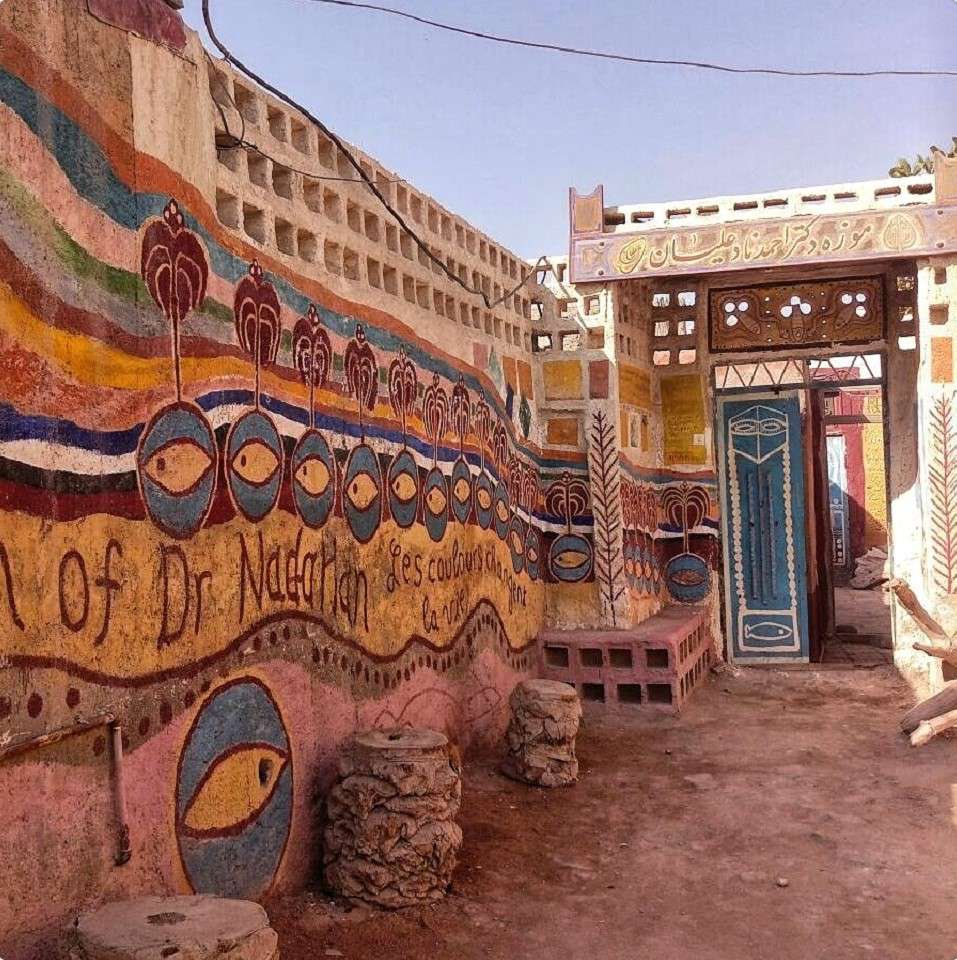 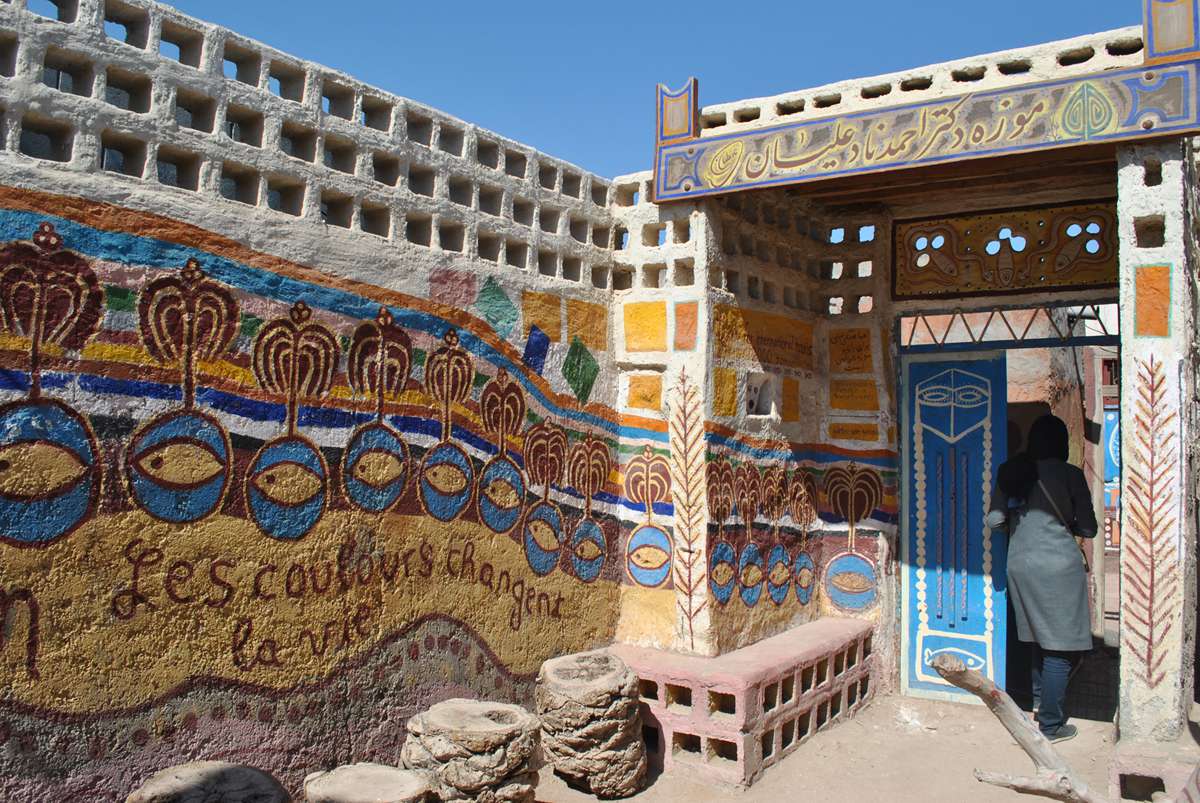 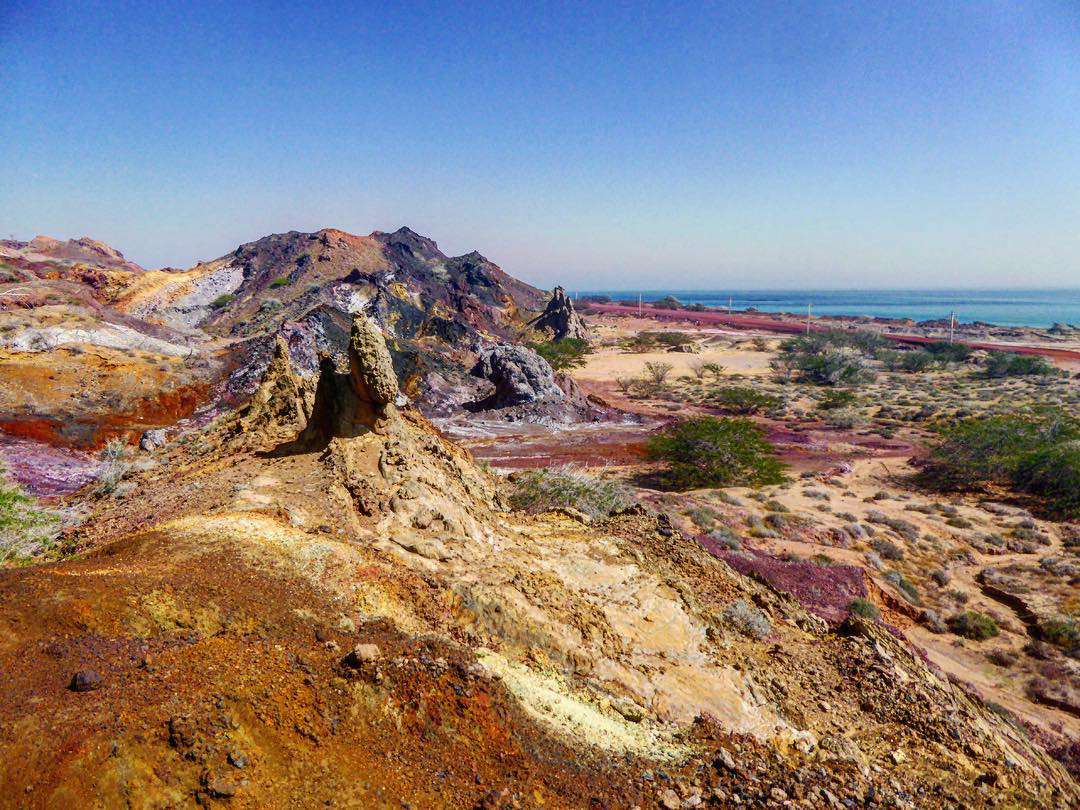 The Rainbow Valley of Iran 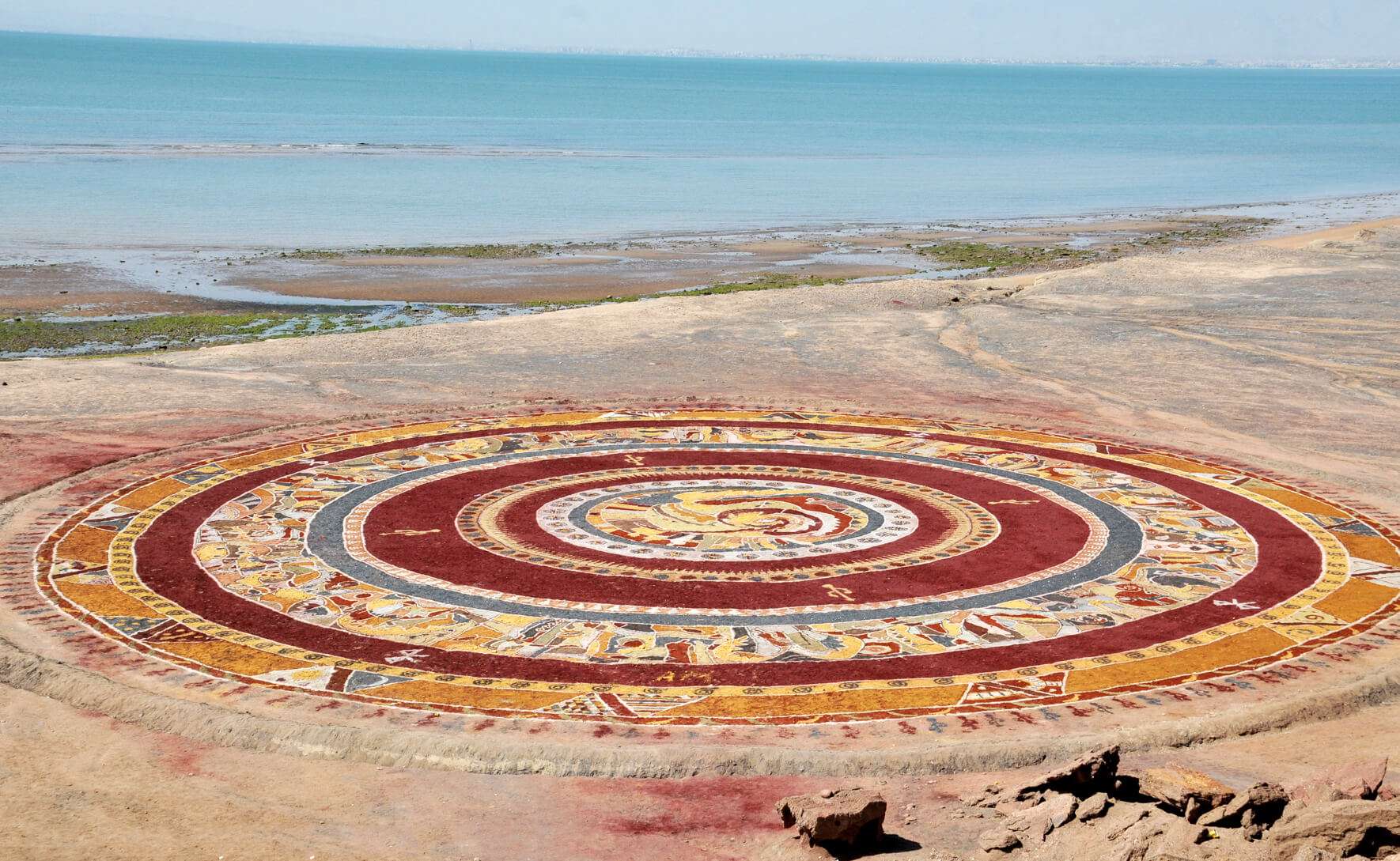 Explore the A Guide to Visiting Rainbow Island (Hormuz)

Hormuz Island, located in the strait of Hormuz, occupies an area of 42-sq.km,  linking the Persian Gulf to the Gulf of Oman. The name of Hormuz, also known as Ormoz, Hormuzia and Khormuzia, has various connotations. Some documents indicate that the name is derived from Ahura Mazda, while other references trace its origin to Khormuzia or Khormaq comprising of Khor, meaning harbor, and moq, meaning palm. On the other hand, some other evidences hold that as Ardeshir the Sassanid rebuilt this area, the name of his son was given to the island.
Its strategic location encouraged the various travelers to this island who have praised the abundance of merchants from all over the world from Egypt and Syria to Bengal and Maldives. Marcopolo visited Hormuz twice in 1272 and 1293 describing the town as a flourishing trade center. Ibn Batutta, the medieval Moroccan traveler, visited Hormuz in 1332 and 1347 and admired its busy market. After the recurrent attacks of Turks and Mongols, the merchants of old Hormuz city immigrated to the new city of Hormuz of which no traces have been left. The previously called new Hormuz is currently located about 60 km west of Old Hormuz. The remnants of old Hormuz sit 10km southwest of Minab.
Historically speaking, the most prominent event which occurred in Hormuz was it being attacked by the Portuguese in 1507. By killing many people, Afonso de Albuquerque turned this area to his own territory and started building forts which were left unfinished because of his forced leave in 1508. However, he came in 1515 and founded the Portuguese rule which lasted for more than a hundred years.
The Safavid Shah Ismail I took some minor measures against them, but he failed. Shah Abbas I started fighting with Portuguese by taking back Bahrain in 1516. Later, two events diminished the prosperity of the Portuguese: first the local uprising in 1521 and the Ottomans’ attack in 1552 and 1581. Shah Abbas occupied Gombron, currently known as Bandar-e-Abbas in 1614 by the attempts of his general, Allahverdi Khan. Later, Alah Verdi Khan’s son, Emam Gholi Khan took back Qeshm and Hormuz in 1622, From Shah Abbas I’s era onward, Hormuz lost its commercial prosperity. Again, after Nadir’s murder, Hormuz experienced a grave crisis and the island was leased to the rulers of Muscat and Oman between 1798 and 1868.
However, having 80 percent of the world’s oil export, Hormuz has still maintained its strategic position.  Hormuz is also the geologists’ paradise where they can discover a wide range of minerals. It also includes one of the most important salt domes of the world.

Located at the southwest of the Island, Rainbow valley is a narrow valley with multi-colored soil surrounded by colorful mountains. It is painted with more than 70 colors and a variety of stones and minerals which make this place an interesting destination for geologists. The minerals include black, white, and grey dolomites, pyrite, gypsum, anhydrite, apatite and iron oxides. The color of the soil ranges from white, yellow, red, green, orange, beige, to brown, light turquoise and even gold. The yellow, red, silver and black colors are mainly of clay and iron oxide compounds, while the white, blue, pink and grey are made of volcanic compounds. The red soil of the valley, called Gelak, is used for painting, cooking, medical and art works.

In this valley, you need your imagination to make out the story of the rocks sculpted into weird shapes resembling eagle, sparrow, rooster or dragon. At the edge of the valley, there is a 40-meter bluff with 180-degree view of the sea. Here you can see the marvelous setting of the sun on the intersection of the Persian Gulf and the Oman Sea.

Dr.Ahmad Nādalian is a pioneer of environmental art in Iran. His artwork is on exhibition in more than 50 countries around the world. He founded a museum and gallery in 2009 to enhance the potential environmental use of Hormoz. Settled in Hormoz, he involved a local community of women in his work to enable them to earn their living by their own hands. He helped out drug addicts by educating them to draw and work with the colorful soil of the island.

In the museum, the visitors can enjoy watching a series of gratifies, a collection of paintings and needlework done by local women, remnants of bones of sea creatures and also a documentary about Dr. Nadalian’s life.

Laying on the north of Hormoz Island, Portuguese fortress is the most important fortress remained from Portuguese dominance on this area. It was built in 1507 by order of Afonso de Albuquerque, the Portuguese sailor. The walls of the fortress are 12 meters high with a diameter of 3.5 meters. The fortress includes rooms with arch-shaped ceilings, a weapon storage, cistern, church, hall and a prison. The fortress was occupied by the order of Shah Abbas I and by the effort of Imam Qoli khan, son of Alah Verdi Khan, the general of Shah Abbas.

Located at the edge of Persian Gulf, the fortress offers a great view of the sea as the visitors enter it. The church is located underground and in the middle of the courtyard. Entering the island, Portuguese started building a church by the use of indigenous materials such as coral. However, the current church gradually turned to the water cistern due to the water leaking through its coral ceiling. Higher up there is the main cistern which used to supply the water for the fortress.

•When to go
The best time to travel to the island is in autumn or winter when the weather is moderate.
•How to go
- Hormuz Island does not have any airport or bus station. If you are planning to travel to Hormuz Island, you can get a ferry ticket from Bandar Abbas port (7:00 AM,9:00 AM,12:00 PM,2:00 PM,5:00 PM,8:30 PM) or Qeshm town port (7:00 AM, 2:00 PM).
- For more information call Bandar Abbas port by 07632237781 or Qeshm port by 07635225536.
- You can visit the island with the help of local people
It is also possible to go around the island on motorbike or bicycle. If you have comfortable shoes, you can also walk.
• When to go
- The best time to visit Hormuz Island is in autumn or winter to avoid warm weather. Early morning or sunset is the perfect time to start the trip.
• Where to stay
- If you intend to spend the night on Hormuz Island, you can take residence in indigenous houses in the only residential village of Hormuz or in the newly built 3 star hotel of Daryaye Sorkh (Red Sea) on the island.
• Fun fact
- The red soil of Hormuz is edible. It is used as a colorful spice to make local food such as jam, bread, pickle and etc. You can buy it at local shops on the island.