Watching the ancient necropolis, including four rock-tombs of the Achaemenid kings, a cubic building known as Kaʿbeh Zardosht, and 9 Sassanid rock reliefs.

Photos of the Naqsh-e Rustam 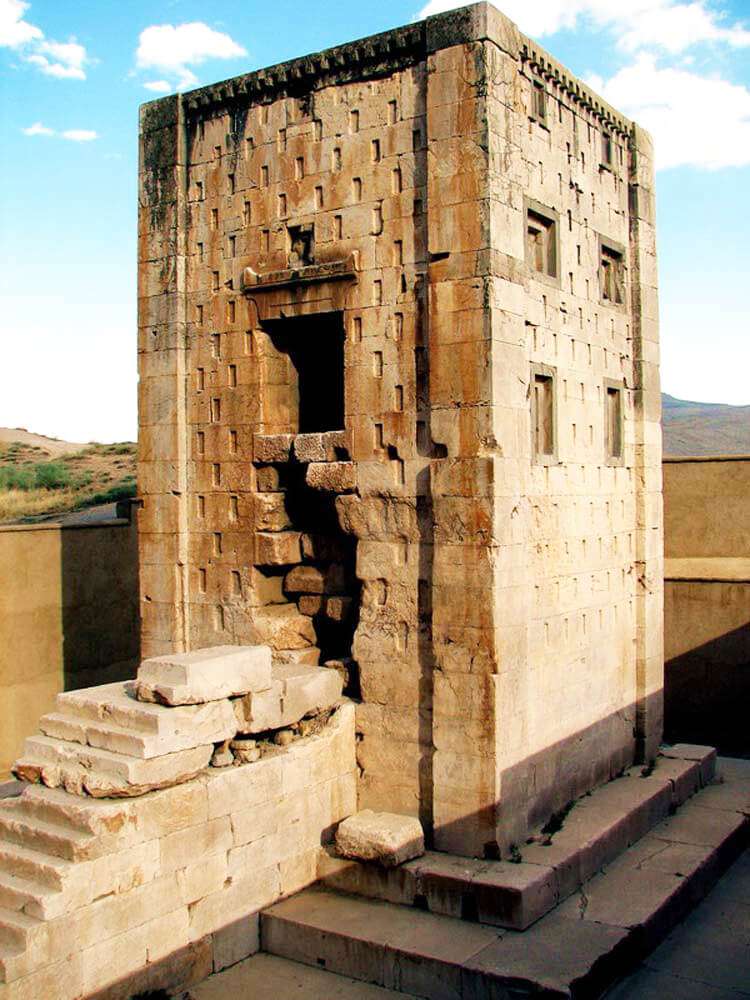 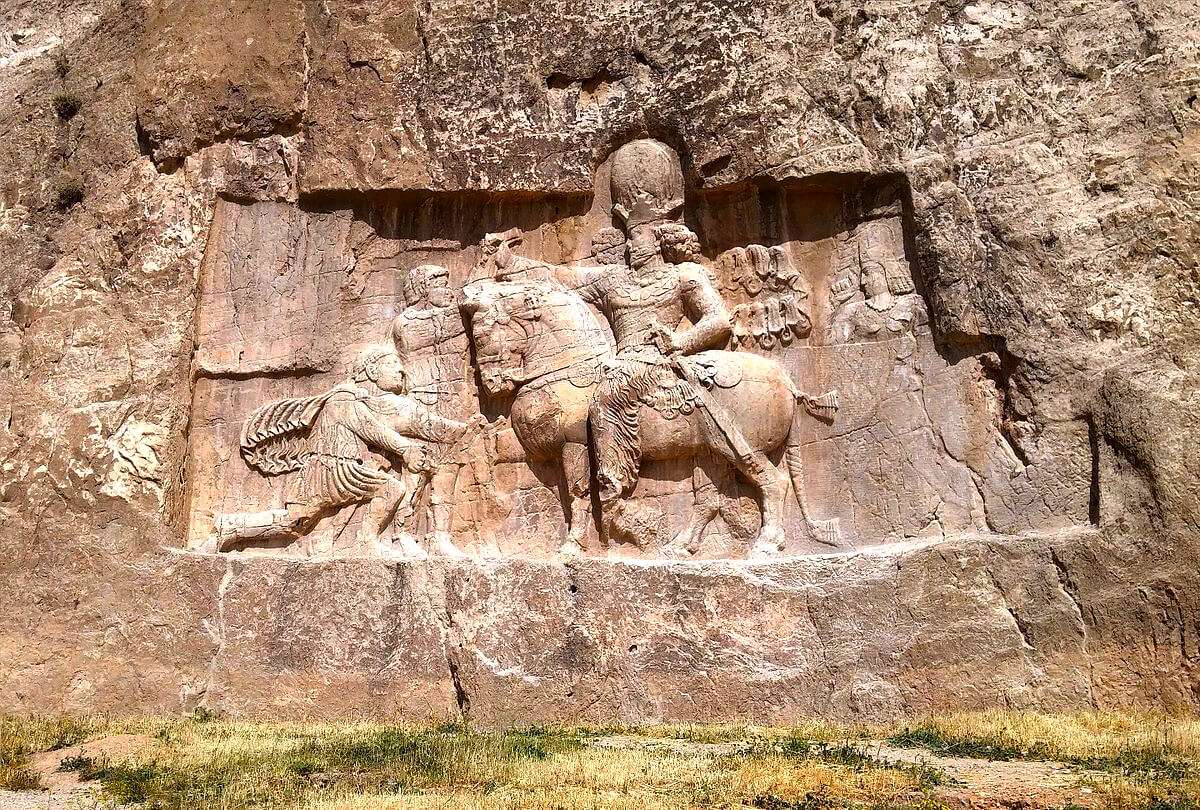 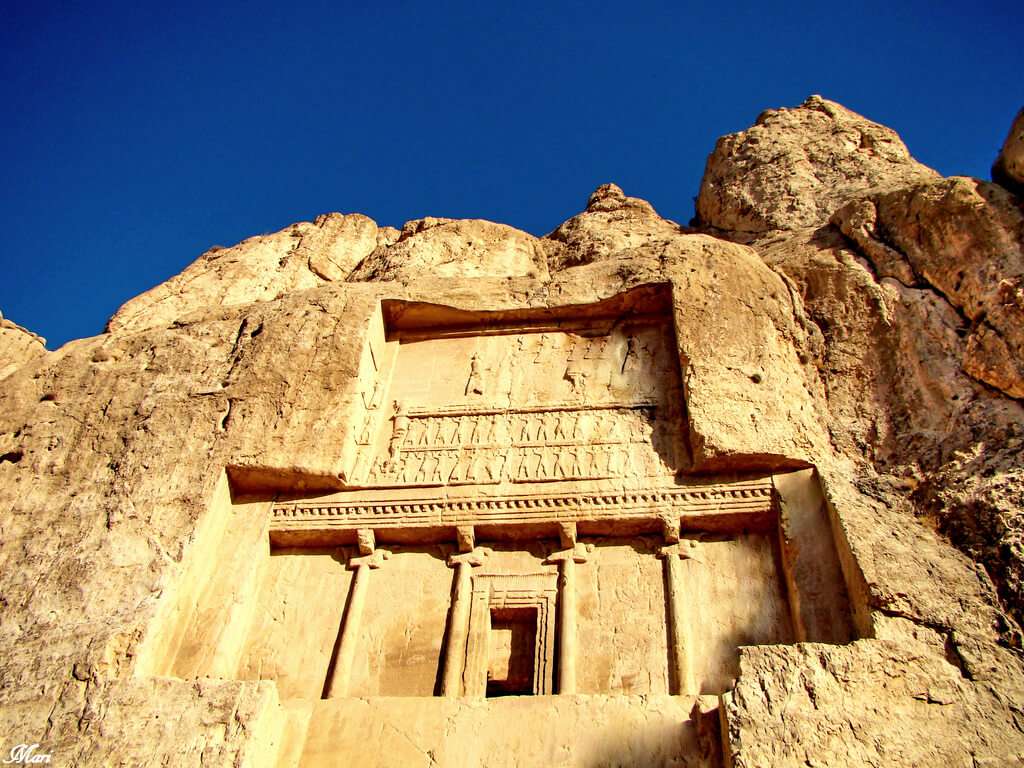 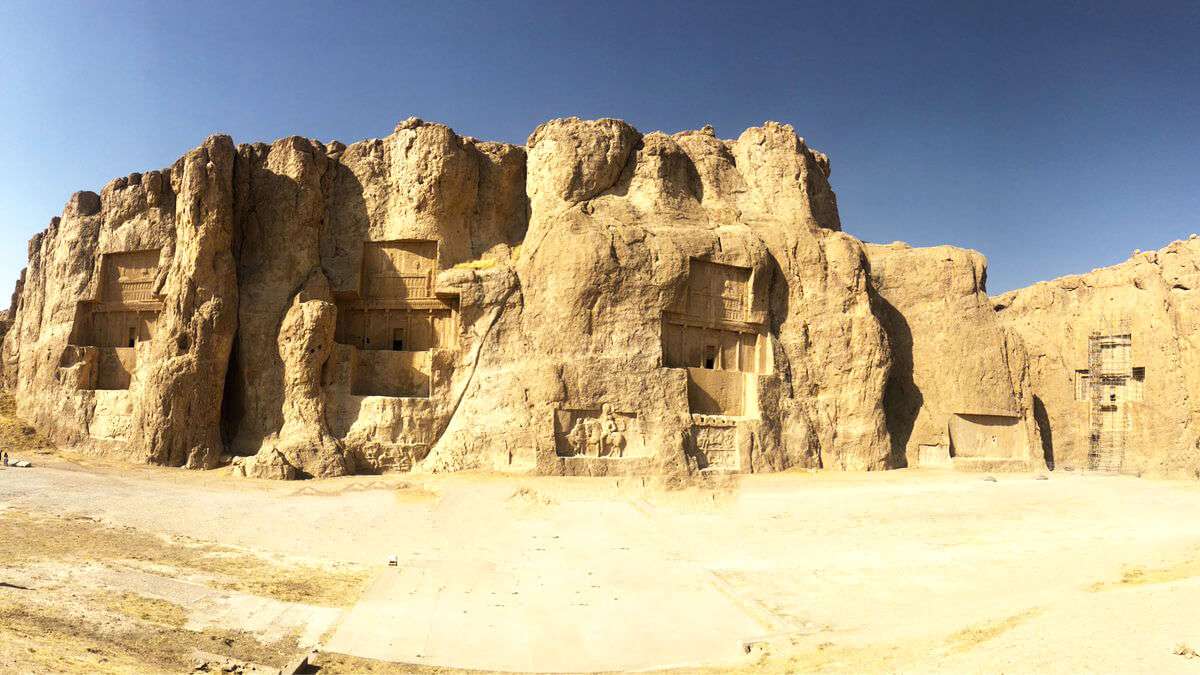 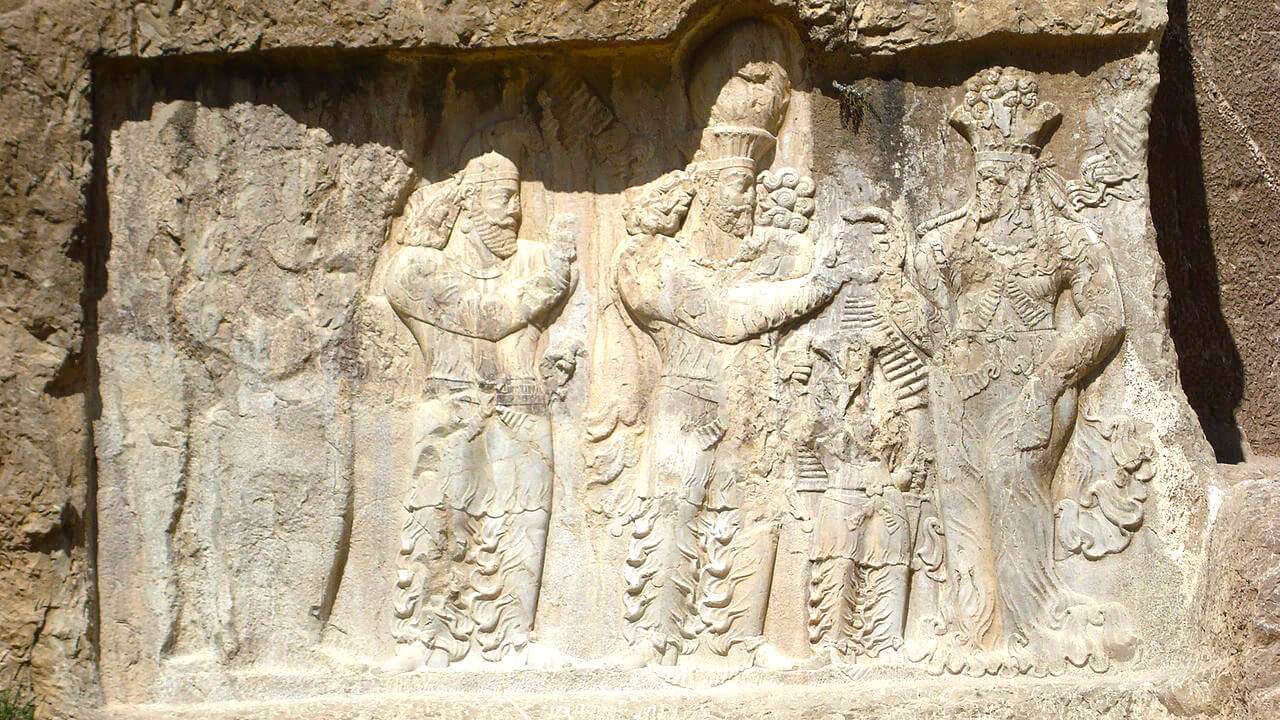 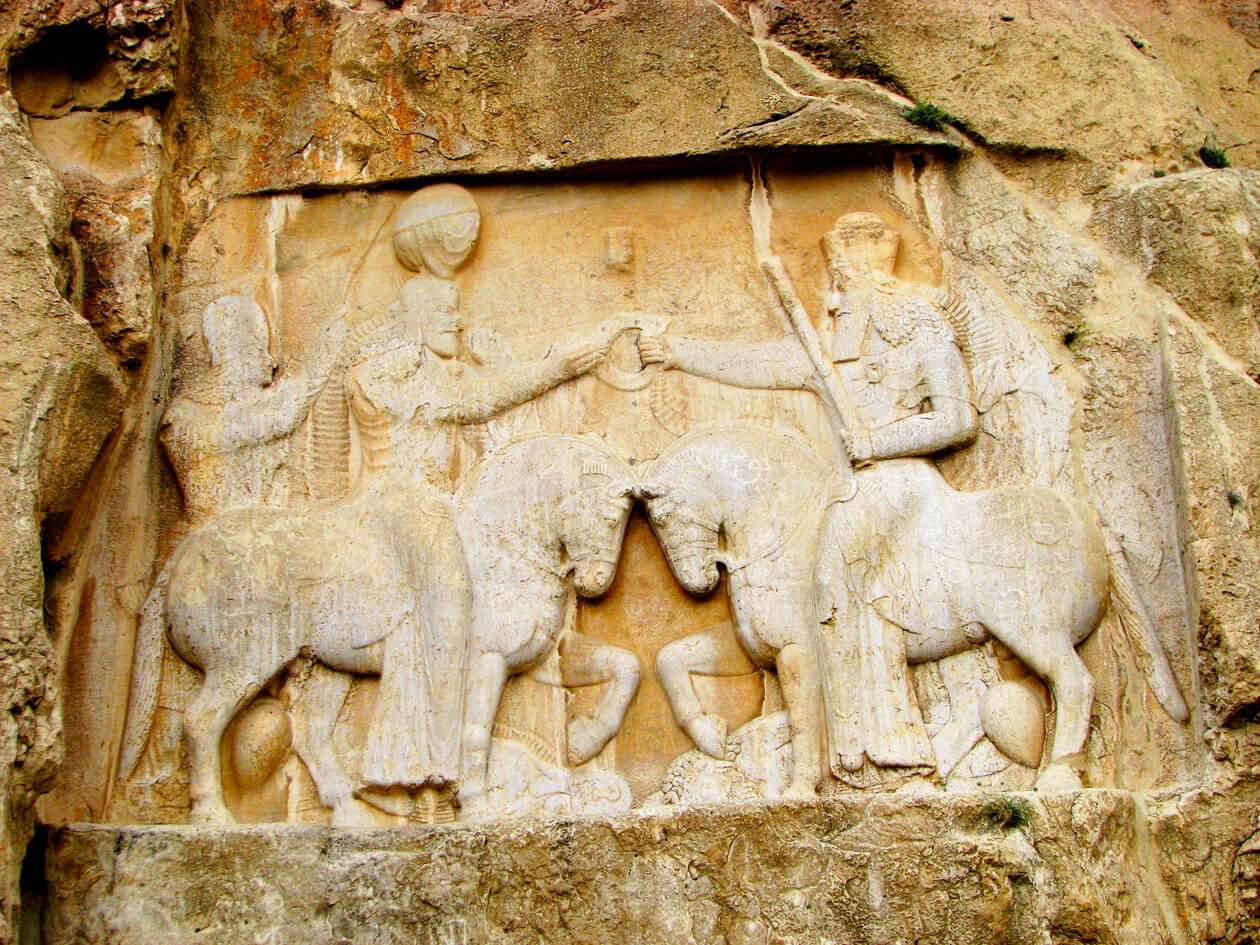 The iconic necropolis of Naqsh-e Rostam is the museum of spectacular reliefs, and rock tombs from Elamite to Sassanid periods. Mostly known as the burial place of the Achaemenid kings, it is located about 6 kilometers north west of Persepolis. It comprises four rock tombs of the Achaemenid kings and their families, a cube-shaped building called Ka’beh Zartosht, and seven reliefs from the Sassanid times. Follow the list of attractions in this must-see site near Shiraz (from the east to west side of the cliff).

The easternmost rock tomb, the Tomb of Xerxes, son of Darius the Great, is (like the other tombs of the site) a cross-shaped rock-cut structure facing the west. In the middle part of the cross, there is an entrance door centered between four engaged columns on a portico. The upper relief depicts the Achaemenid king standing on a stepped pedestal greeting Ahura Mazda. His crown shows the tomb is constructed before his accession to the throne. There are several reasons that the tomb is attributed to Xerxes: first, the stone works of the tomb are very similar to those in Darius and Xerxes’s era. Second, the place where the tomb lies is a flat rock which is a better location in comparison to that of the neighboring tomb (the tomb of Artaxerxes I on the west side of Darius’s tomb). Therefore, it can be concluded that the better location was occupied sooner. Also the longitudinal axis of the tomb is accurately paralleled with the façade, and this feature is only seen in the tomb of Darius the Great (Shapur Shahbazi, pp. 114-115).

Next to Xerxes’s tomb (on the foot of the rock), is the chronologically last Sassanid relief, depicting the investiture of King Narseh, the son of Shapur I, who is taking his diadem from the goddess Anahita. The relief displays the king Narseh (Nercy) in the center with a twisted mustache and long beard and curled hair on his shoulder. He is wearing a necklace, earrings, a long shirt and a pair of loose trousers with a belt. His shoes have a ribbon fallen on the ground. Narseh is looking at Anahita standing at his left side. She is carved on a beautiful garment with a crenelated crown from under which her curly hair is falling. The person standing on the right side of the king is wearing a long hat in the shape of a horse head. He has raised his right hand as the sign of greeting. He is probably Hormozd II, the son of king Narseh. A young boy standing between the King and the goddess can be Narseh’s grandchild, Azar Narseh, who has a royal ribbon.

This is the only relief showing the investiture ceremony performed by Anahita (instead of Ahura Mazda). Though it is an unfinished relief (on the left) with no inscription, the exclusive shape of the crown identifies the Sassanid king. However, the recent studies assert that the lady in the relief is Shapurdokhtak II (the wife of King Narseh, the Queen).

Tomb of Darius the Great

The oldest royal tomb, assigned to Darius I according to its inscription, is the one on which the other three tombs are modeled. It is a 60-meter height cross-shaped tomb with four equal branches. The Four engaged columns appear for the first time on this tomb, supporting the huge carved lintel on the top. The notable feature of Darius the Great’s tomb is its similarity to the Darius’s Palace in Persepolis. For example in terms of size, the portico and the entrance door of the tomb and palace are the same. The trilingual (Elamite, Babylonian and Old Persian) inscription carved between columns bears a report about Darius’s rule. The upper relief shows the King standing on a three-step platform in front of a fire altar, with his right hand position as a greeting sign with Ahura Mazda. The gesture of Darius’s right hand is completely like the right hand of Ahura Mazda which implies the close connection between them. However it is also understood as a sign of praying in front of the royal fire. There is a bow on the left hand of the king, showing he is proudly a bowman protecting his people.

The king stands on the royal throne with the legs in the shape of a lion and several men (in two rows) bearing the throne. They are from different tribes which shows the diversity of the lands over which the Achaemenids ruled. In the first row (the upper one), there are 14 men from the Persian, Medes, Chosian, Parthava, Heratian, Bartian, Sogdi, Kharazmi, Zarangian, Rokhaji, Thatah Gushi, Gandarian, Hindu and Huama tribes, respectively from west to east.  The 16 men bearing the throne in the lower row are from the Scythian, Babylonian, Assyrian, Arab, Egyptian, Armenian, Cappadocian, Lydian, Ionian, Scythian, Eskuderaii, Greek, Putayaii, Kushiaii origins, respectively from west to east. There are two other men in the west and east of the throne’s legs which seem to be carved after the completion of the relief. They are from Mak and Karkehi origins.

Inside the tomb, there is a narrow portico leading to a long and wide corridor which includes 9 stone sarcophaguses of Darius, the Queen and other members of the family.

Right below Darius’s tomb, there is the double relief of Sassanid kings Bahram I and Bahram II, each showing a battle scene. The upper relief is carved on a 7 * 3-meter panel depicting Bahram II’s battle with his enemy. As the relief is eroded or ruined in the lapse of time, the recognition of the enemy is not possible. We can only identify the king who wears a crown with two eagle wings. He is supported by a knight on the horseback. In the lower part, there is a relief attributed to king Bahram III. It displays the young king killing his enemy by a long spear.

Relief of King Shapur I

Next to the preceding relief (on the left side), there is another monumental Sassanid relief dedicated to the king Shapur I’s triumph over Valerian (a Roman emperor whom he imprisoned). The Roman emperor is bowing to the Sassanid king in submission, while the Gordian III is dead under the horse’s feet whose harness is in Philip the Arab’s hand. This scene celebrates the victory in the Battle of Edessa in 260 AD.  Added later to it, the inscription and relief of the Kartir, the influential magus in the Sassanid era, depicts him standing behind king Shapur.

Tomb of Artaxerxes I

The third royal tomb (from east to the west), is the tomb of Artaxerxes I. He accessed the throne in 465 B.C and died in 423 B.C, when there was a civil war in the lands of Achaemenes. He could suppress the rebellions and built magnificent palaces in Persepolis and Susa.

Below the tomb of Artaxerxes I, a Sassanid relief represents the encounter of king Hormozd II with an armored enemy. It is an 8.40 by 4 meter bas-relief showing King Hormozd II in a battle scene. Although the most part of his head is damaged, his crown, bearing eagle wings and beads, confirms that he is a Sassanid king. The man standing behind the king is of noble birth or a prince who is wearing a helmet topped with a ball. The relief is later surmounted by an unfinished relief of Azar Narseh which has ruined a part of the older relief of Hormozd II.

Darius II’s tomb is the last Achaemenid tomb in the site. It is located about 33 meters southwest of Artaxerxes’s tomb. The tomb is attributed to Darius II (who ruled from 425 to 404 B.C) because it is obviously carved after the tomb of Artaxerxes I and imitated its specifications. The design of the façade displays the same scene in the other tombs. The king is standing opposite to a fire altar while raising his right hand. The tomb is known for the well-preserved stone coffins inside.

Relief of king Hormzd I

There is a relief on the foot of Darius II’s tomb showing a king fighting his enemies. It is attributed to king Hormozd I since he is wearing a costume with two metal balls on his shoulders, like that of Hormozd I relief in Firuzabad.

King Bahram II relief depicts him standing in the middle of the panel, while surrounded by his family members and nobles. Archeologists recognized that this Sassanid relief is carved on the remains of another relief from the Elamite period (about 2 millennia B.C.) showing a god and goddess sitting on a snake throne (an Elamite feature).

Relief of Ardeshir I

Of the best-preserved reliefs on the westernmost of Naqsh-e Rostam, is Ardeshir I’s relief. It is the oldest Sassanid monument in the site. Indicated by the trilingual inscriptions in Middle Persian, Parthian, and Greek, on the body of the horses, this nicely carved relief shows the investiture of king Ardeshir I (the founder of Sassanid Empire) by Ahuramazda. The king is taking the “ring of power” from the god who defeated the evil, Ahriman. The last Parthian ruler, Artaban V, can be seen under the feet of Ardeshir’s horse.

Right opposite to the last Achaemenid royal tomb (Darius II’s tomb), there is a tower-like 13- meter-height building standing in a pit. Now called Kabe Zartosht (the cube of Zoroaster), the limestone building is fronted by a stairway. It has a dentil cornice on the top, and four blind windows on each wall (except for the northern wall). The door is open to a square-shaped room with no interior decorations. Once it was believed to be a fire temple during Achaemenid era, but later it was confirmed by some historians, including Heleen Sancisi Weerdenburg, to be a place with a dynastic significance used for the coronation of Achaemenid kings.

The stonework technique, used in the construction of the tower, shows that it dates back to the reign of Darius the Great (522-486 B.C). There is a Sassanid inscription on the foot of the building (on the three sides) which describes the deeds of King Shapur I in three languages of Middle Persian (on the east wall), Parthian (on the west wall) and Greek (on the south wall). The other inscription added in the time of Kartir (the high magus in the Sassanid period), on the east side of the building, indicates that this structure had been called “bun Khanak” or Foundation house. As the holy book of Zoroastrians, Avesta means “foundation” too, it can be concluded that it functioned as a treasury for keeping this book.

A pentagonal well was discovered near the Elamite relief by Schmidt, the German archeologist. It seems to be carved to collect water and used as the drinking water reservoir during drought.

The site is open every day except on national holidays (the religious mourning days) from 7:30 AM to 8:00 PM (during spring and summer), and from 8:00 AM to 6:00 PM (during autumn and winter)
please note: visitors can NOT enter the royal tombs
Hiring a local guide is absolutely helpful.