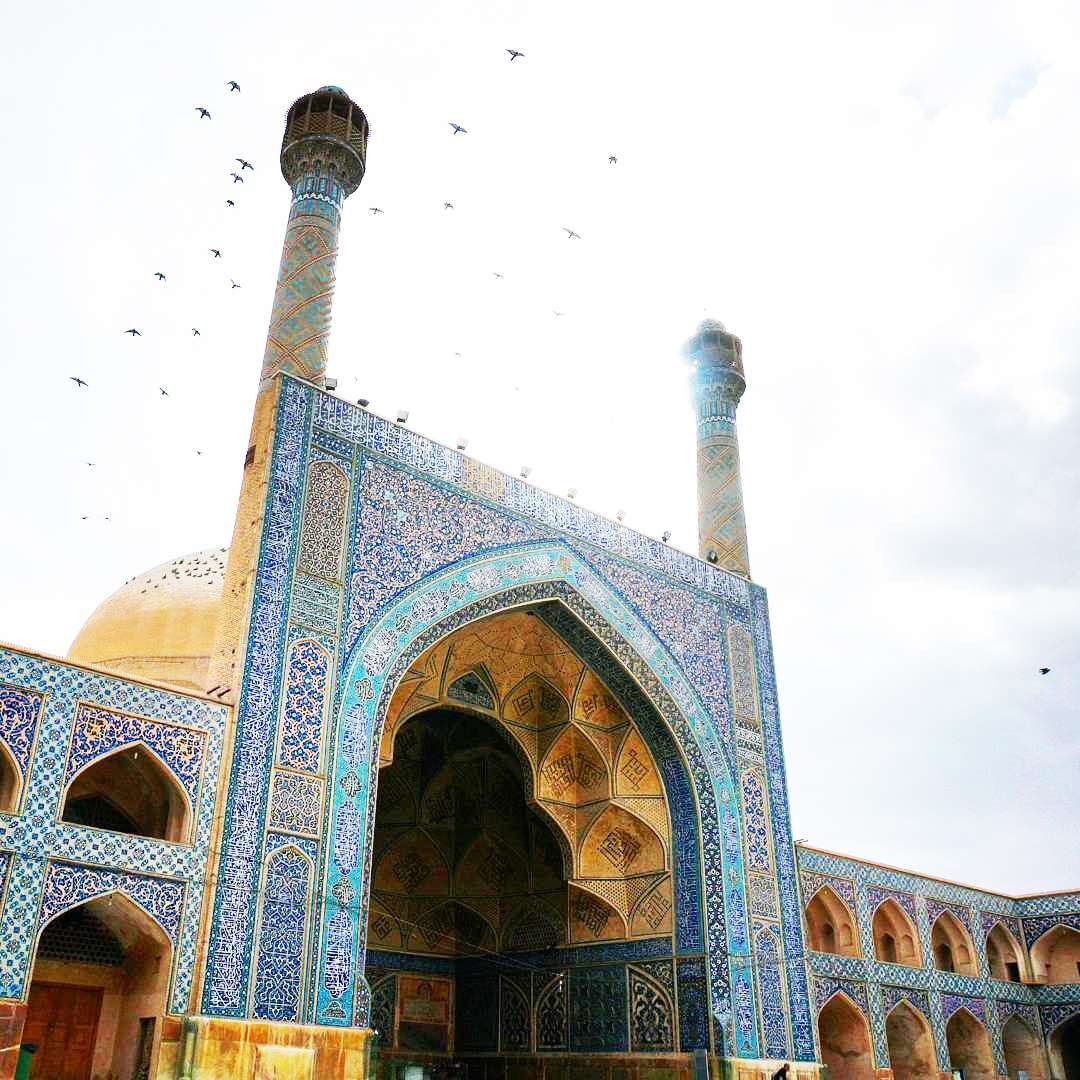 Watching the UNESCO Heritage site that has been the scene of different architectural style from 8th to 20th century.

Photos of the Jame Mosque of Isfahan 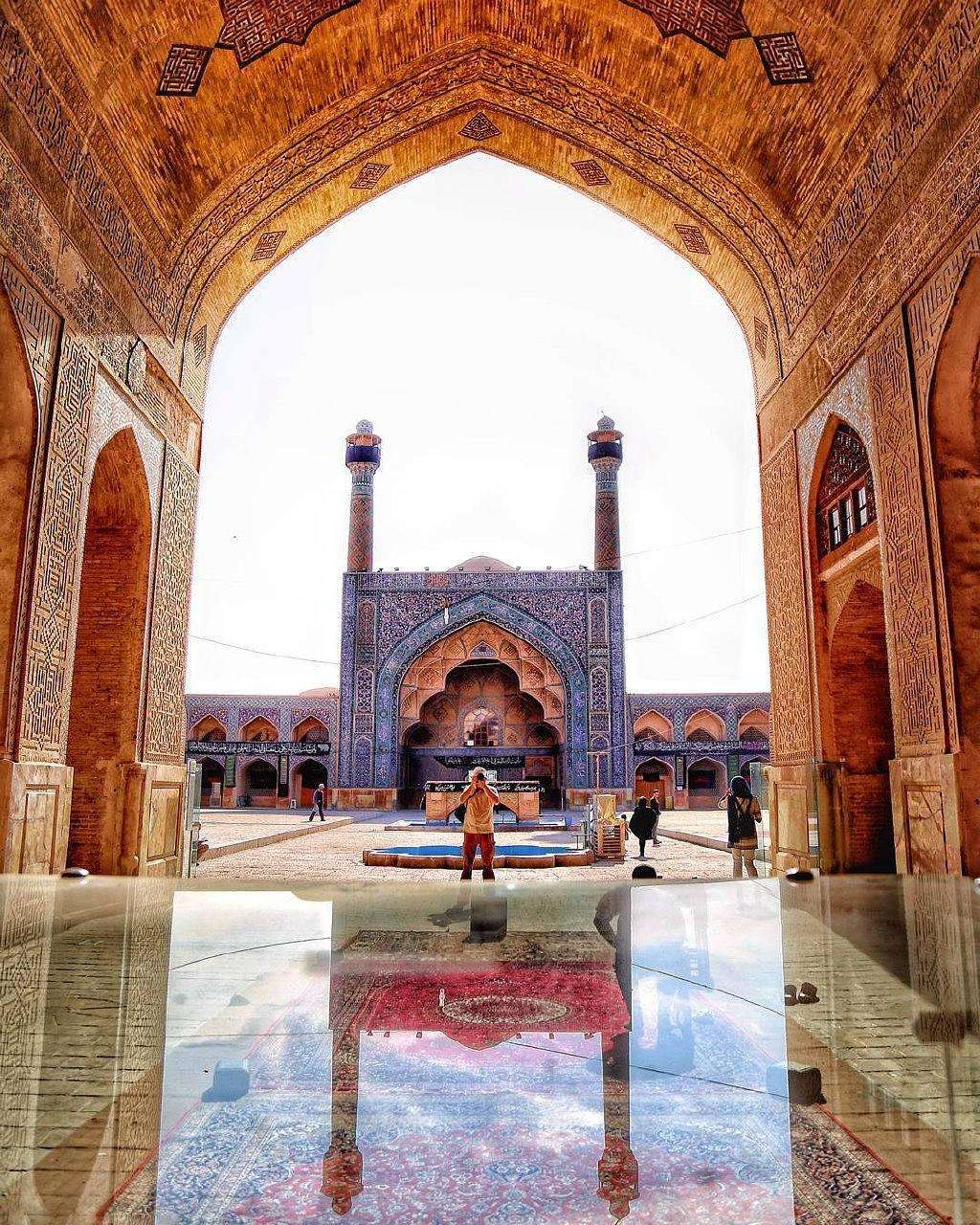 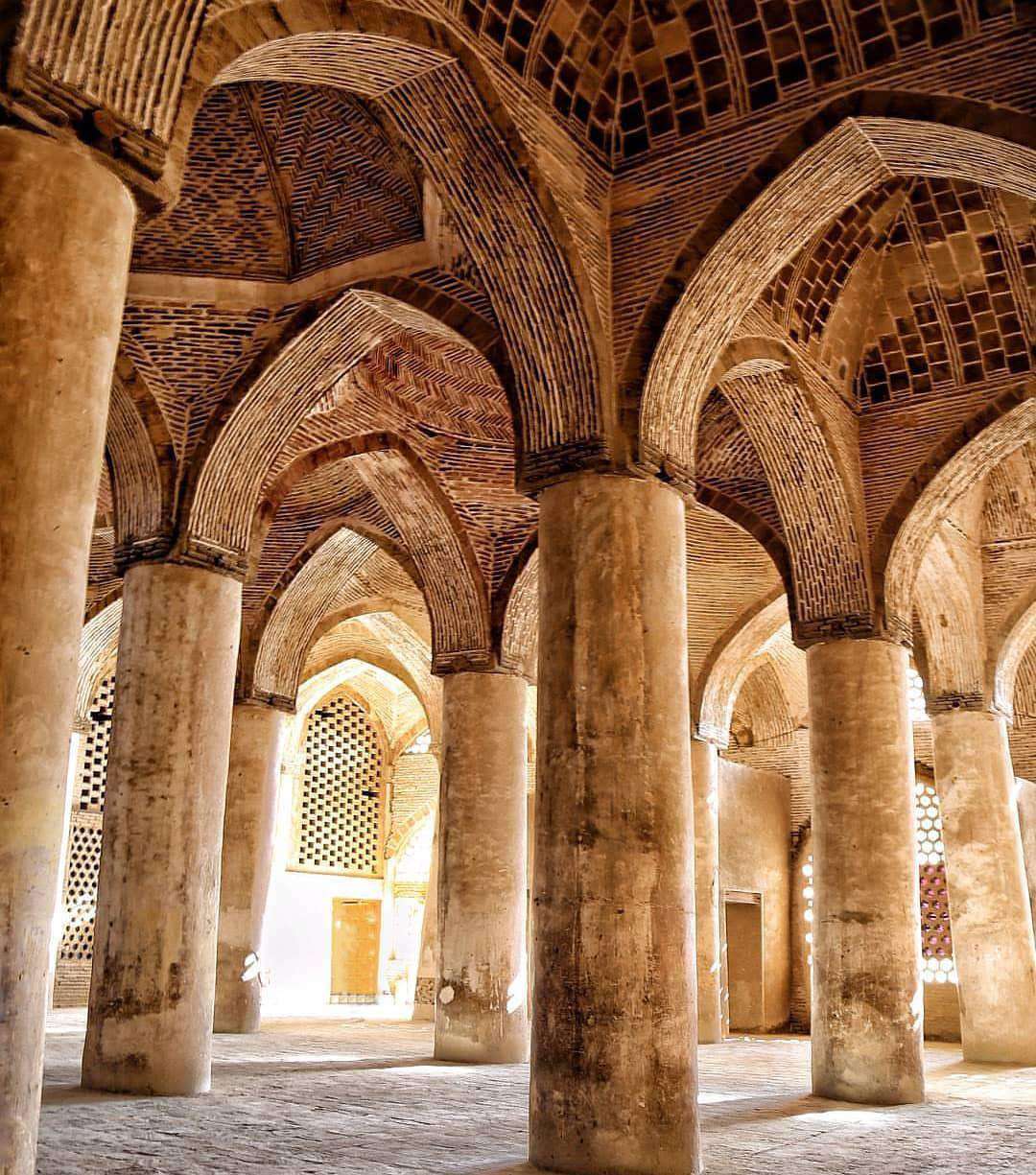 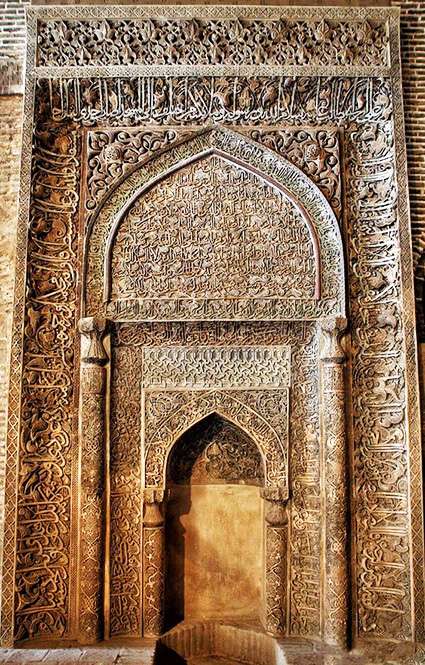 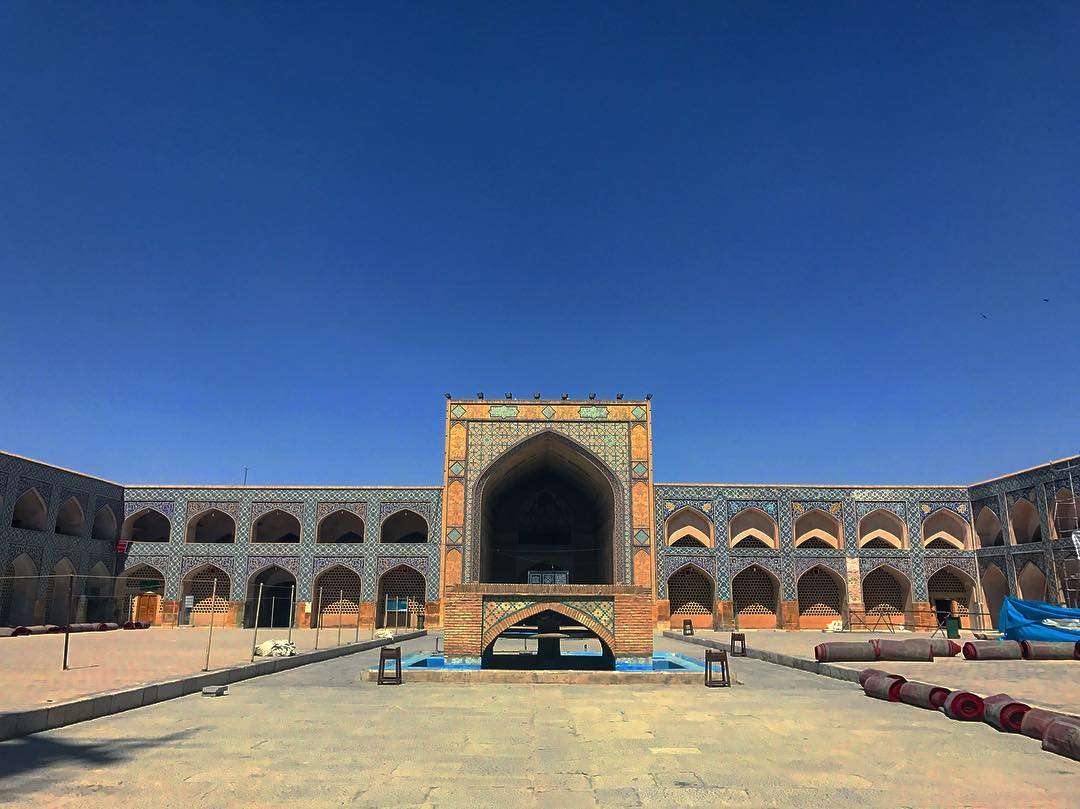 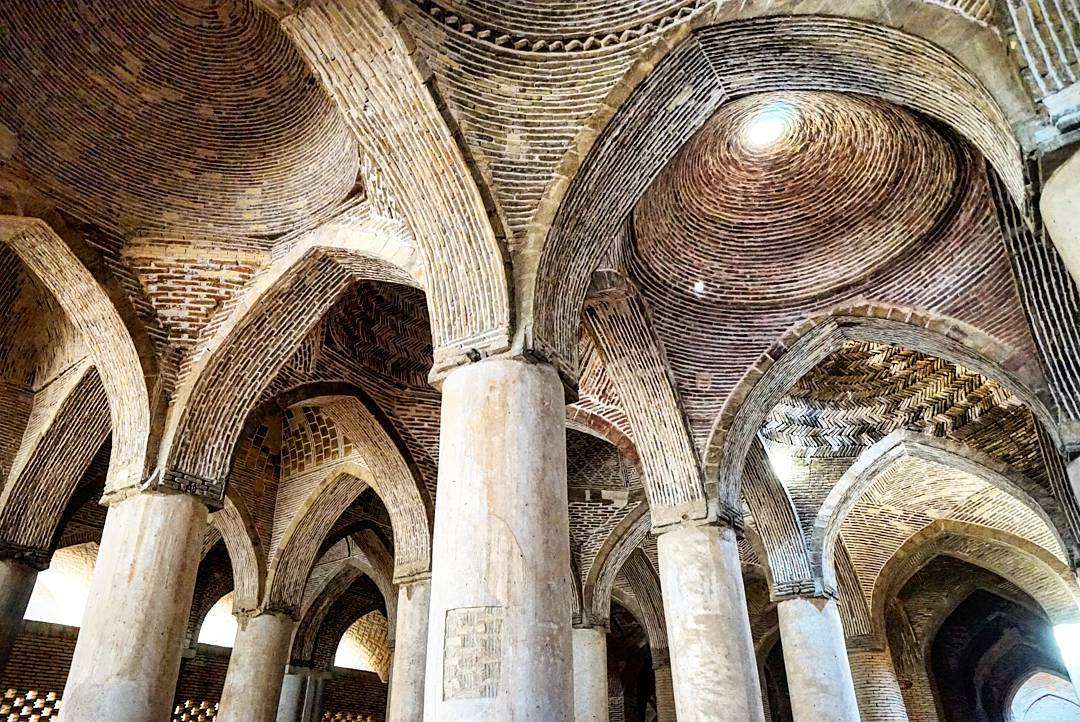 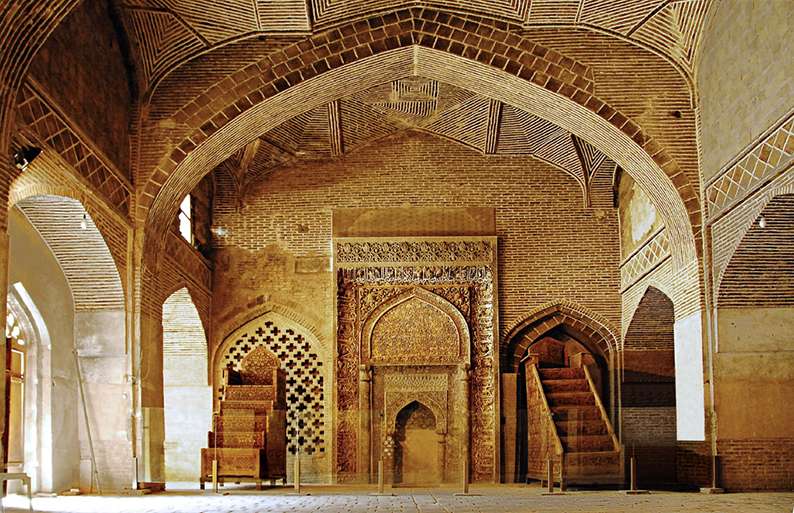 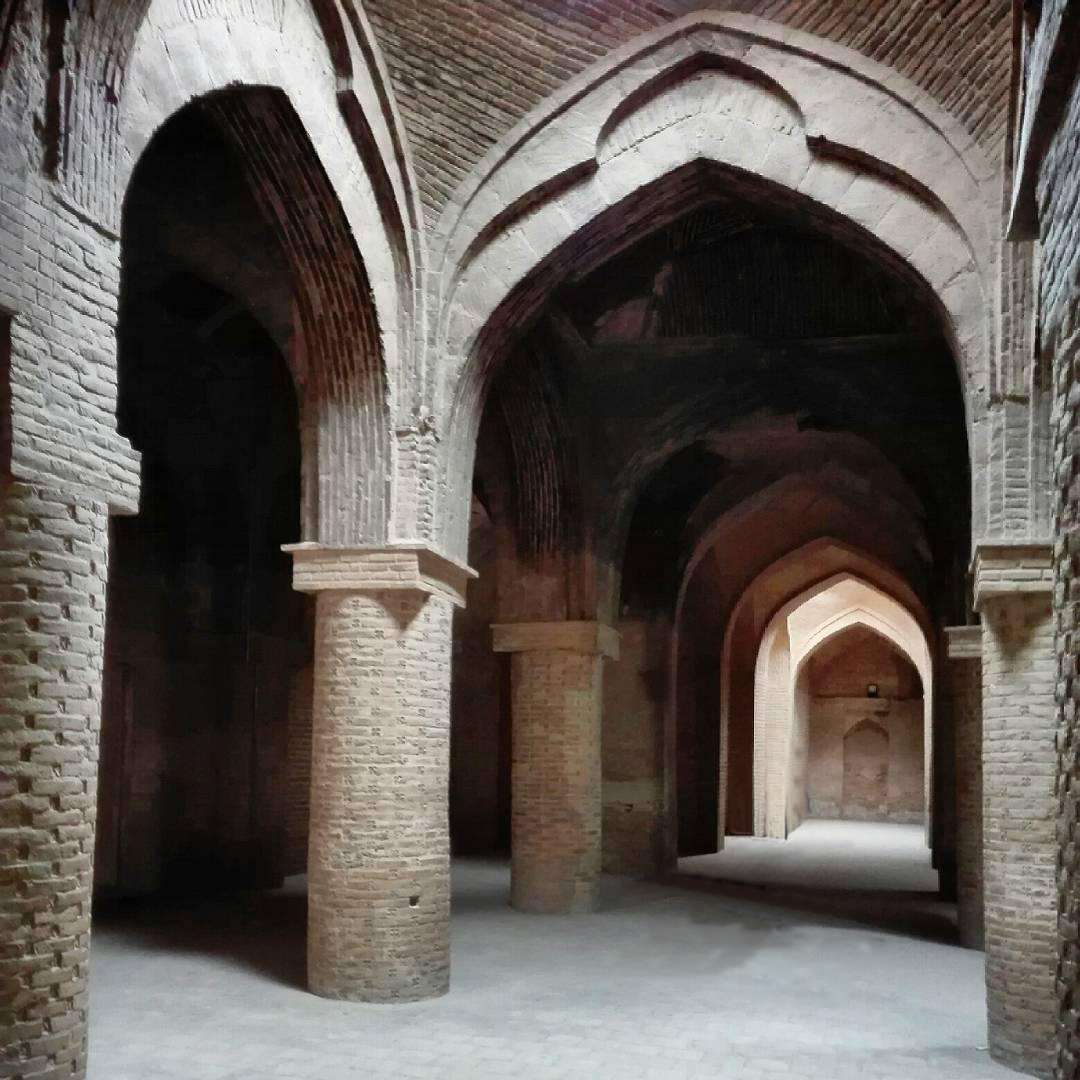 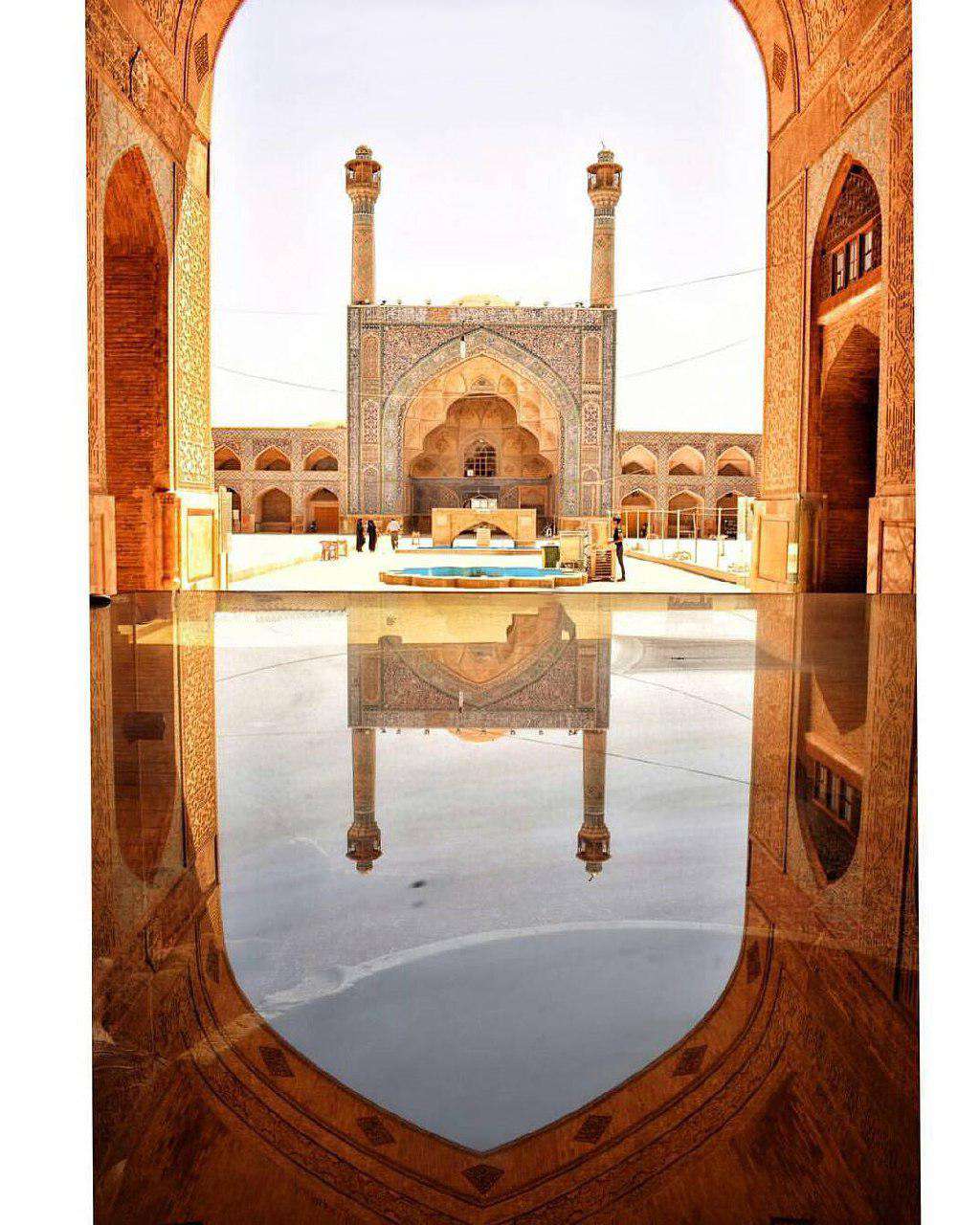 Explore the Jame Mosque of Isfahan

Isfahan contains a large number of mosques. In the middle of the 17th century, more than 160 mosques existed in Isfahan. Among all these, two of them gained the high status of a congregational mosque: Jame Abbasi mosque, and Masjed-e-Jame, dedicated to the principal Islamic practice of Friday prayer, and also to the preachments delivered on political and social occasions. Jame mosque has been the spiritual and religious center of Isfahan, as it was built over the 8th-century Zoroastrian temple and has maintained this authentic appeal for 14 centuries. Today, Jame Mosque continues to stand proudly at the oldest quarter of Isfahan, a piece of history among the forgetfulness of the city’s haste. Successive dynasties, such as Buyid, Seljuk, Ilkhanid, Timurid, and Safavid, left their imprint in this mosque, representing different architectural phases in the post-Islamic era.

The very early plan of the mosque was a hypostyle mosque, built after the Prophet mosque with an open courtyard, covered sanctuaries, and pillars. The first renovations began in the 10th century in the Buyid era. Later in the Seljuk era (11th century), due to the urban expansion and the construction of Kohne Square (now Atiq Square) in the vicinity of the mosque, great architectural alternations and various decorations were applied to the mosque. In the 11th century, when Isfahan became the capital of Seljuk dynasty, the style of the architecture and decorations changed.  Great alternations also happened in this mosque such as the construction of the two domes on the north and south and the four porticoes which turned the mosque to a quadruple-portico (chahar ayvani) plan. The prevailing brickwork and plaster decorations with geometric and vegetal patterns were done in the Buyid and Seljuk era. Later, in the 13th and 14th centuries, during the Ilkhanid era, the tent-like hall was built at the rear of the western portico and Oljeitu niche was added. Then, in the Mozaffarid era (14th century), a columned hall was built in the north of the western portico, and a school on its eastern wing. In the Aq Qoyunlu era (15th century), two minarets in the south, the marble plinths and the faience tile decorations of the southern portico were added. In the Safavid era, the northern portico was restored, and a hall, attributed to Shah Abbas the great, was affixed to the south-west of the portico. There are several stone containers used for drinking, religious, and charity purposes. Called sangab, these are mostly attributed to the Safavids. A small raised platform, dating back to the Safavid era, is located in the yard, which is a venue for Haj rituals and calling to prayer.

Let’s start from the main entrance which is the most recently built structure, dating back to 1804. This Qajarid portal, dated 1803, holds a hanging chain, which used to be a part of the entrance of every congregational mosque, symbolizing justice and unity among the Muslims. The mosque was a haven for refugees in such a way that if a guilty person managed to grasp and hold this chain, no one could arrest him. This rule was broken at the order of Amir Kabir in the Qajar era. The decoration of this Qajarid portal, with the name of Fathali shah on it, is compatible with the Seljuk brickwork seen in the other parts of the mosque.

Entering through the entrance portal, Hakim Soffe is on your right in the corridor.  Hakim in Persian language means doctor attributing to an anonymous doctor who cured the poor in the Seljuk era. You can see the beautiful 11th-century Buyid brick stalactites and the 16th century Sols calligraphy here. You can fully understand the construction process of the mosque during the ages by checking out the collection of pictures and plans provided here.

After walking through the corridor from Hakim Soffe toward the courtyard, a little stucco mihrab (altar) sits on the left. This Ilkhanid Mihrab (14th century) was used by mystics during their rituals.

In front of the Hakim ayvan, there is a Muzzafarid hall, with rounded columns and cross-like patterns, symbolizing the sun. This sign is rooted in the ancient history of Iran, dating back to 3000 BCE. This hall stands as an inspiring witness to the might, knowledge, and achievements of the 14th century architects. The gentle light coming from the uniquely decorated vaults inspires tranquil and peaceful vibes. In the south-eastern hall, there used to be a Seljuk library. Some parts of it were destroyed by fire, due to Ismaʿili’s attack in the 12th century, and some other parts in the war of 1980. There is a beautiful inscription on the left, albeit if you can have a chance to see it in the dark. Flanked by this hall, Malekshah’s successor’s prayer hall (11th century), is one of the rare architectural instances of the Seljuk era with square columns. The unique design of this most beautiful prayer hall presents an excellent expression of the traditional Islamic decorative arts and calligraphy. This hall is noteworthy for its different and uniquely decorated vaults among which you cannot find two identical decorations.

Now a few steps forward, on the lower ground, you enter Nezam-ol Molk dome chamber located on the south of the mosque, named after the Seljuk’s minister. This magnificent 34m-high dome has remained intact from the 11th century. It was once a columned hall; some of the columns were removed and the surrounding columns were doubled to bear the dome about 900 years ago.  This magnificent dome is supported by 40 columns. What is noteworthy about this dome is using an innovative technique of converting a square plan to an octagonal one, and then to a round area which is inspired by the Sassanid architecture. The architects in the Seljuk era managed to absorb the Iranian cultural components and create magnificent adornments. The masterful stucco decoration is a tribute to the ingenuity of the Persian artisans. Here you see three types of decorations, including inscriptions, vegetal patterns, and geometrical patterns. Another decorative feature in this dome chamber is the exquisite tile-worked niche (mihrab) which dates back to the Safavid era (17th century) and has been built over the original Seljuk one.

Step towards the southern part of the mosque, to the Saheb ayvan which was built in the Seljuk era and named after Saheb Ibn Ebad, a learned minister of the Buyid dynasty. This 12th-century ayvan was once a home to the theology students. The decorations and tile-works on this ayvan generally represent Aq Qoyunlu and Safavid art. The blue mosaics and two 35 m high minarets belong to the Aq Qoyunlu's era. The white faience on a blue ground inside the arch date back to Shah Tahmasb I and Shah Abbas II.

On the east, you can find Shagerd ayvan; the only ayvan in the mosque with creamy, pure Seljuk stalactites. The stalactites in this ayvan are more delicate than the ones in the other ayvans. The mosaic art work dates back both to the Seljuk and Ilkhanid eras. The excuisite inscriptions were completed by the well-known calligraphers in the time of the Safavid king, Shah Soleiman. Have a look at the marble stone stretching along the ayvan.

Opposite the Shagerd ayvan, Ostad ayvan is located on the western part of the mosque dating back to the Seljuk era. However, the decorations were later added in the Safavid era, specifically in Shah Sultan Hossein Safavid. Stories are told about these ayvans like this one: a master of architecture designed the western ayvan named Ostad (meaning maestro) and then his student followed him and started to build the eastern one, named Shagerd (meaning student). Now you can see the reflection of the western ayvan inside the eastern one. However, to consider it from a different perspective, naming the architectural masterpieces as master and student has been prevalent in Iran as a way to show respect to the status of the maestro, and also to cherish the concept of learning.

On the northern part of the Ostad ayvan (Western portico), there is a prayer hall attributed to Sultan Oljeitu. The hall boasts the most exquisite stucco prayer niche (mihrab) in this mosque, with mysterious floral motifs, dating back to the Ilkhanid era. There are 13 other niches in this mosque.  Immersed in the intricate floral decoration of the niche, you will wonder at the artist’s masterful play with geometric and floral patterns and inscriptions to create a three-dimensional effect. The flanking hall is Beit al-Shata (winter/summer hall) a 15th-century prayer hall with thick columns that keep the temperature balanced in all seasons, providing a welcoming and peaceful prayer space. The translucent alabaster slabs on the vault let the gentle light comes in. The unique design of this hall gives one the impression of standing beneath several set up tents.

Towards the northern part of the mosque and opposite the Sahib ayvan, you find Darvish ayvan, a deep porch which is said to have been the seat of the dervishes (Mystics). With delicate pendentives and plasterwork, Darvish ayvan showcases authentic Iranian decorations. The cross-shaped design, Chalipa, which is the typical pattern used in the congregational mosques, beautifully decorates its roof. It is recorded that the main entrance to the mosque was located here in the Seljuk era. Later, in the Mozaffarid era, the entrance was blocked due to the construction of a prayer hall behind the ayvan.

On the northern part of the courtyard, in order to reach the Tajol molk dome chamber, you should first step in the oldest sanctuary of the mosque, where you are bewildered by the Seljuk brick columns. A few steps forward, you will be conquered by the brick, egg-shaped dome with stunning stucco and fine brickwork echoing the majesty of the Seljuks. Although this dome chamber is smaller than the southern one, it displays more outstanding patterns in inscriptions, displaying the expertise of the architects in combining beauty and geometry. The northern dome chamber was built one year after Nezam al-Mulk dome by Nezam al-Mulk’s rival, Taj al-Mulk, who was another Seljuk minister. This dome chamber used to have an entrance to the royal quarter. What is prominent about the decoration of this dome is the splendid styles of calligraphy and the five-faced Shamseh (sun-like pattern) under the dome. The Kufic inscription on the stem is the oldest dated inscription (1088) of the mosque. Thirty-two inscriptions are decorating the lower part of the stem displaying the sacred attributes of God.

Muzaffarid Madreseh (school) is a two-ayvan school which is also known as the Soffeh Omar. It is a gallery of rare inlaid mosaics and 14th-century calligraphy. It used to be the first place for burring the dead bodies who were later transferred to Iraq.

To have the best experience, hiring a local guide is essential
ِِDuring the prayer times, the mosque is not open to the visitors
The Mozaffarieh school is under restoration at the time of writing and it is not open to public.