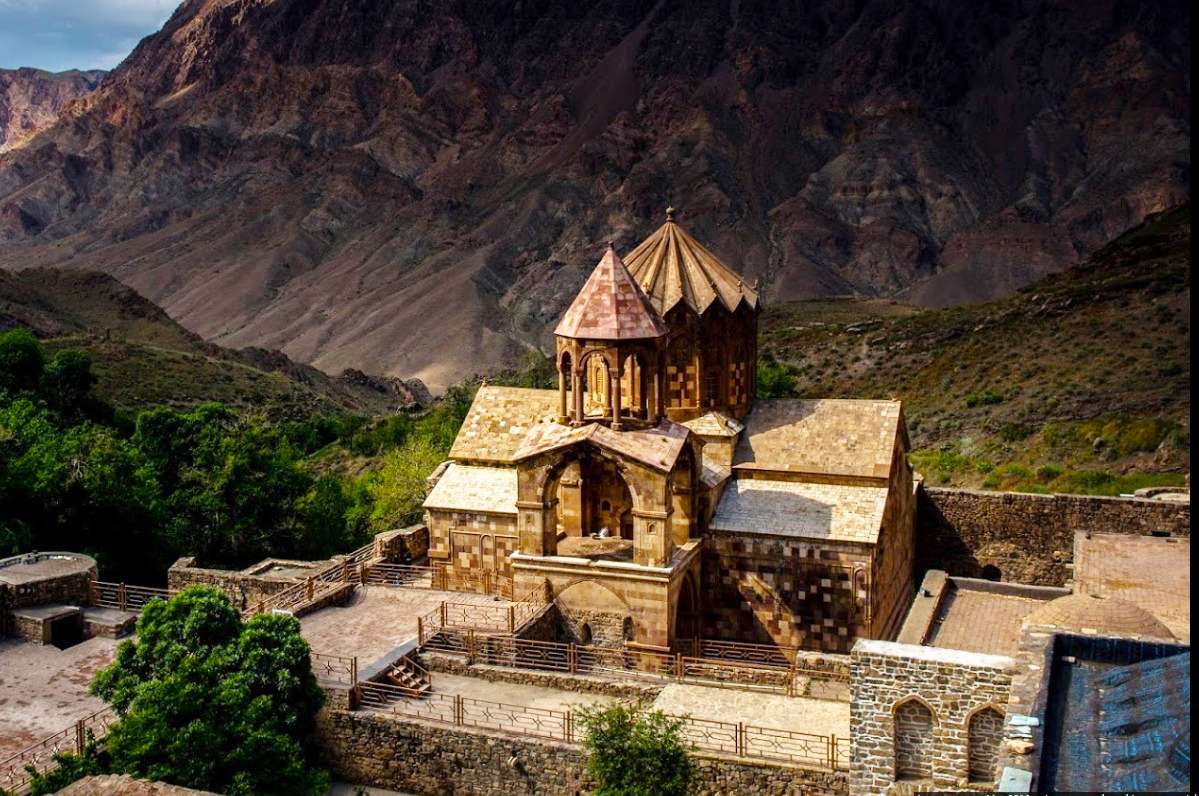 Visiting the Armenian Cathedral in Julfa, dating to the 7th century AD.

Photos of the Saint Stepanos Monastery 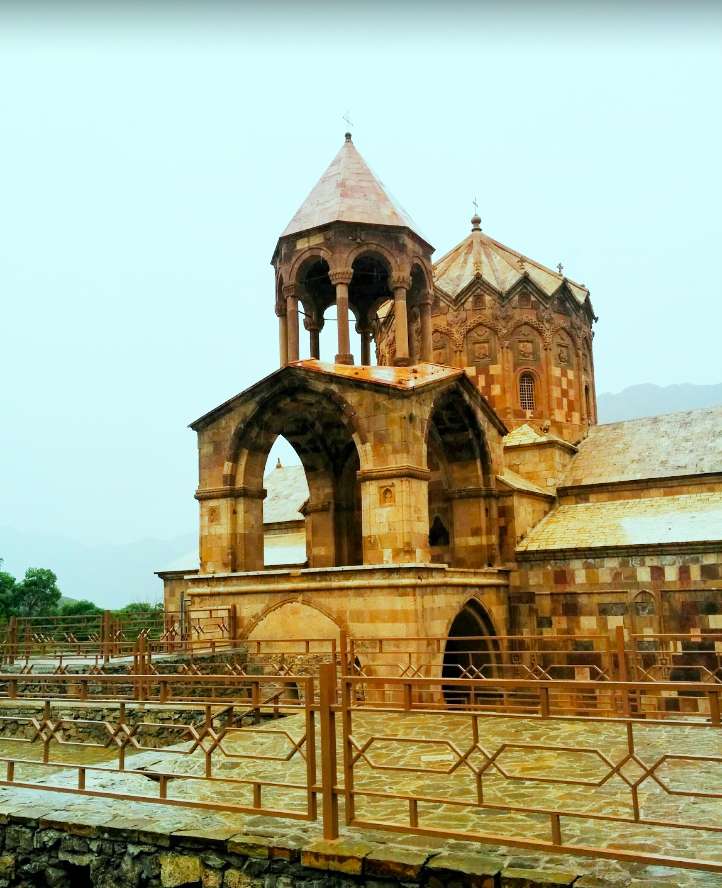 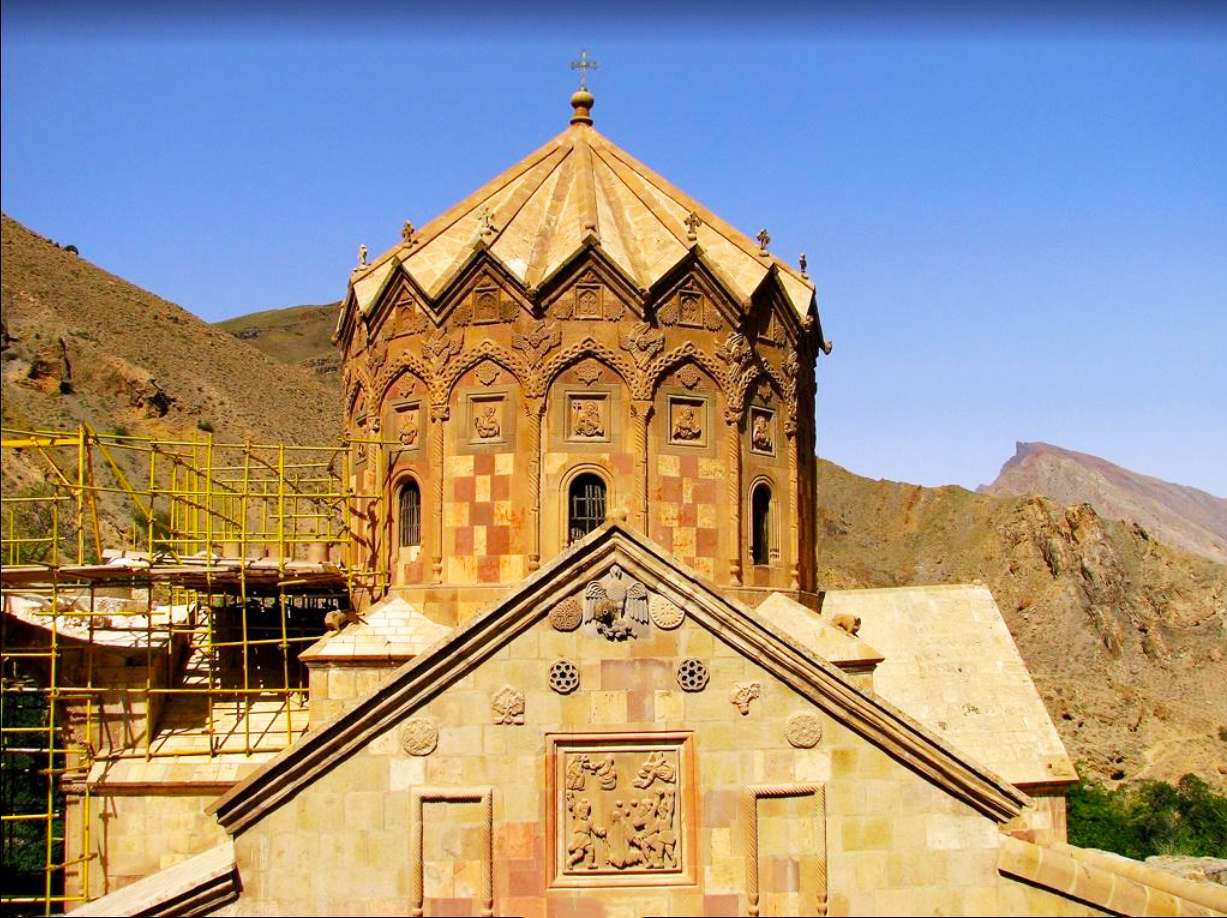 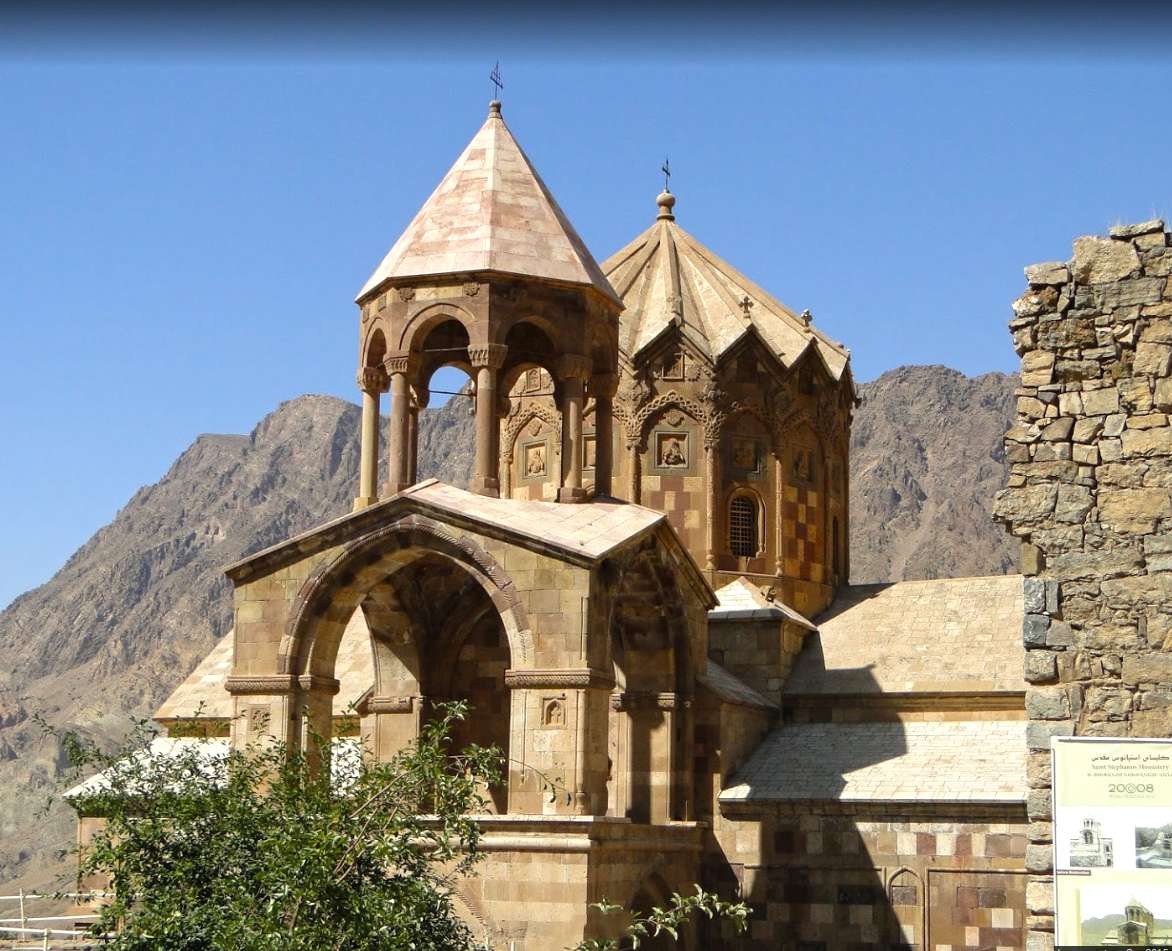 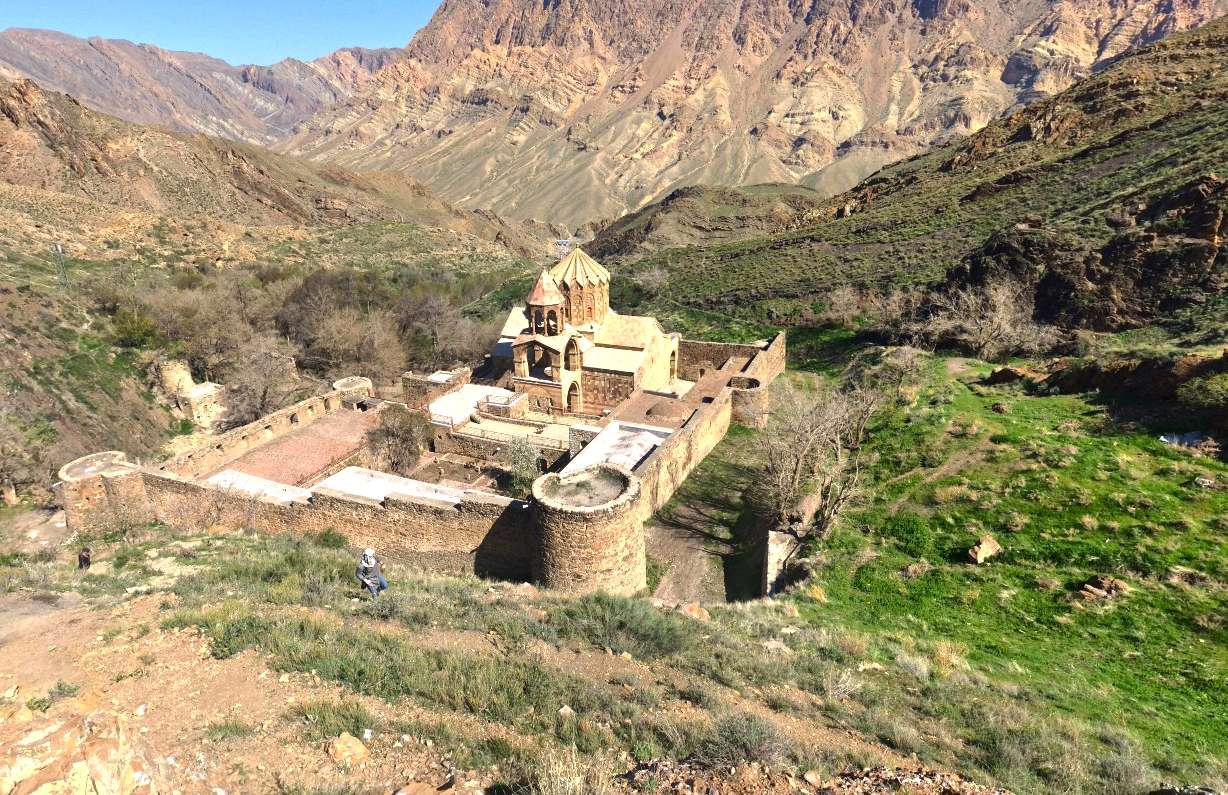 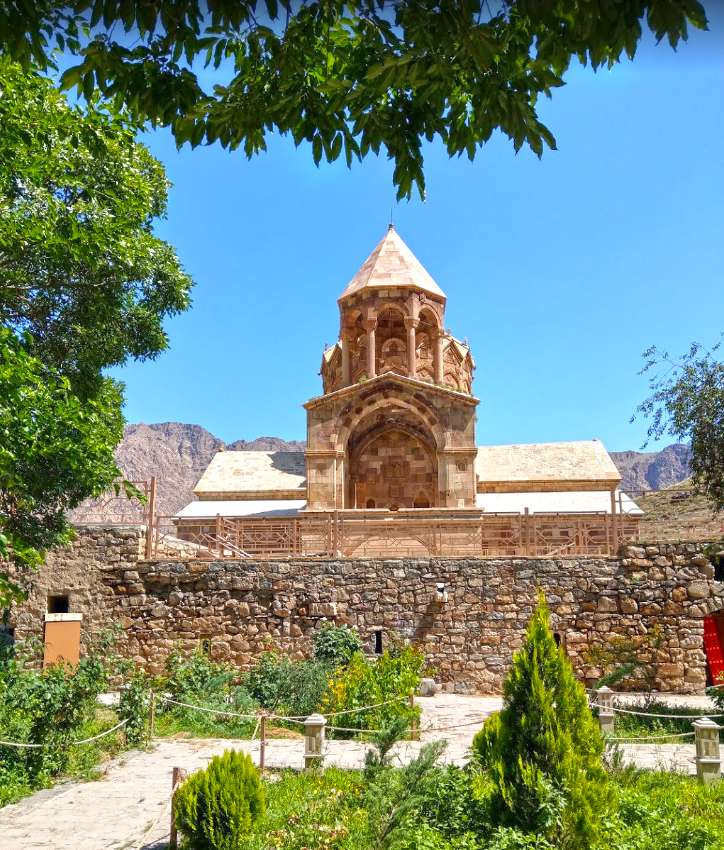 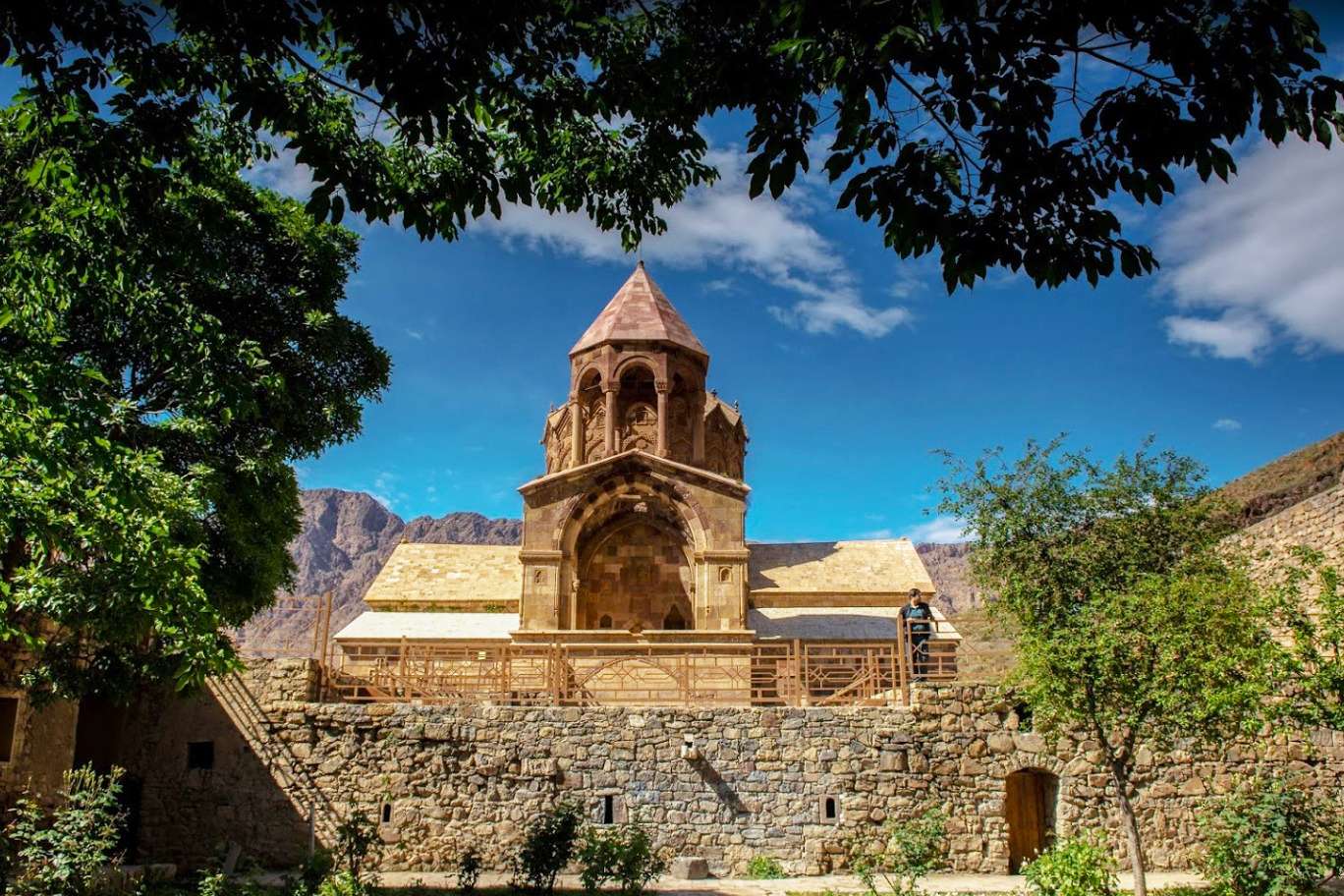 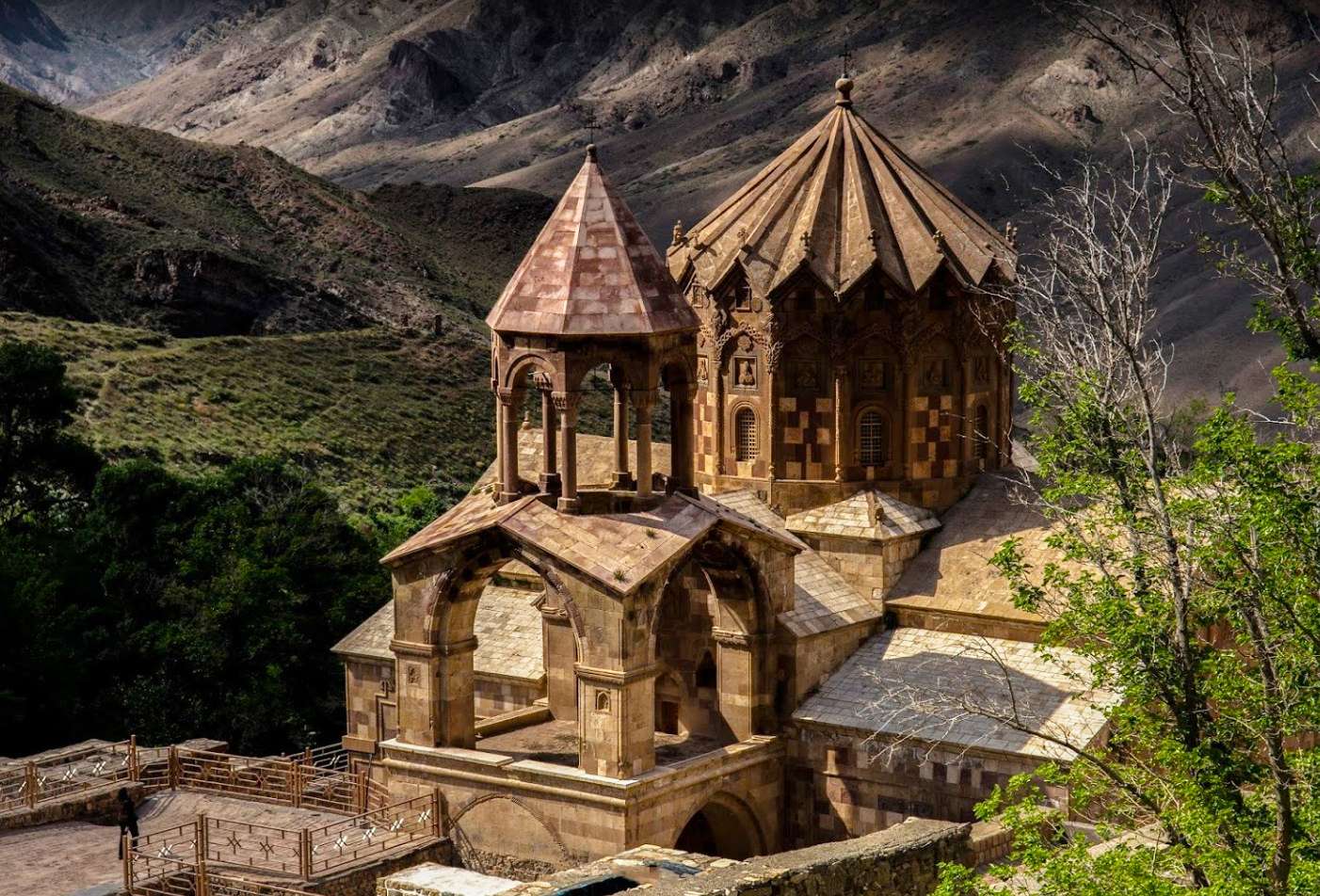 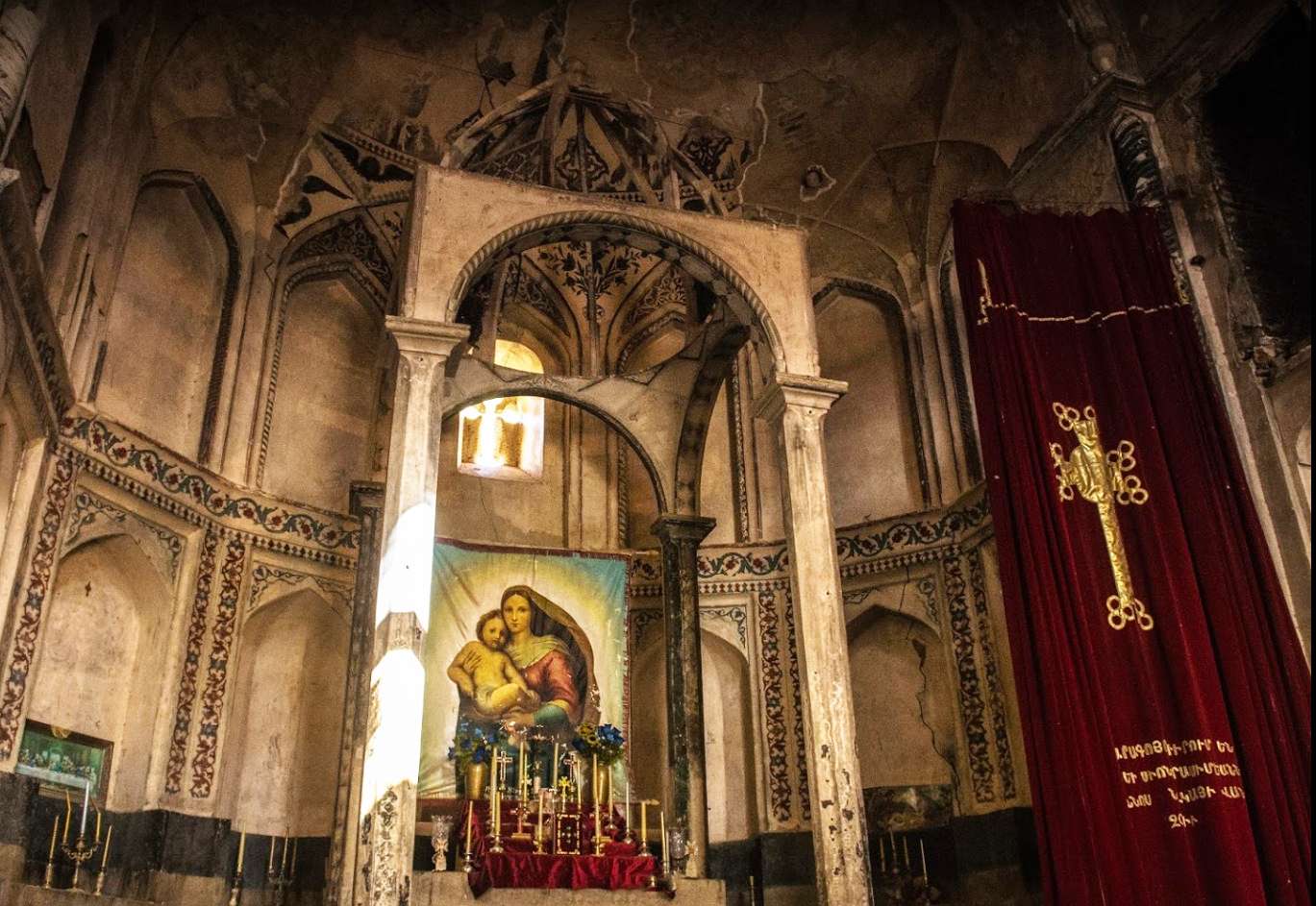 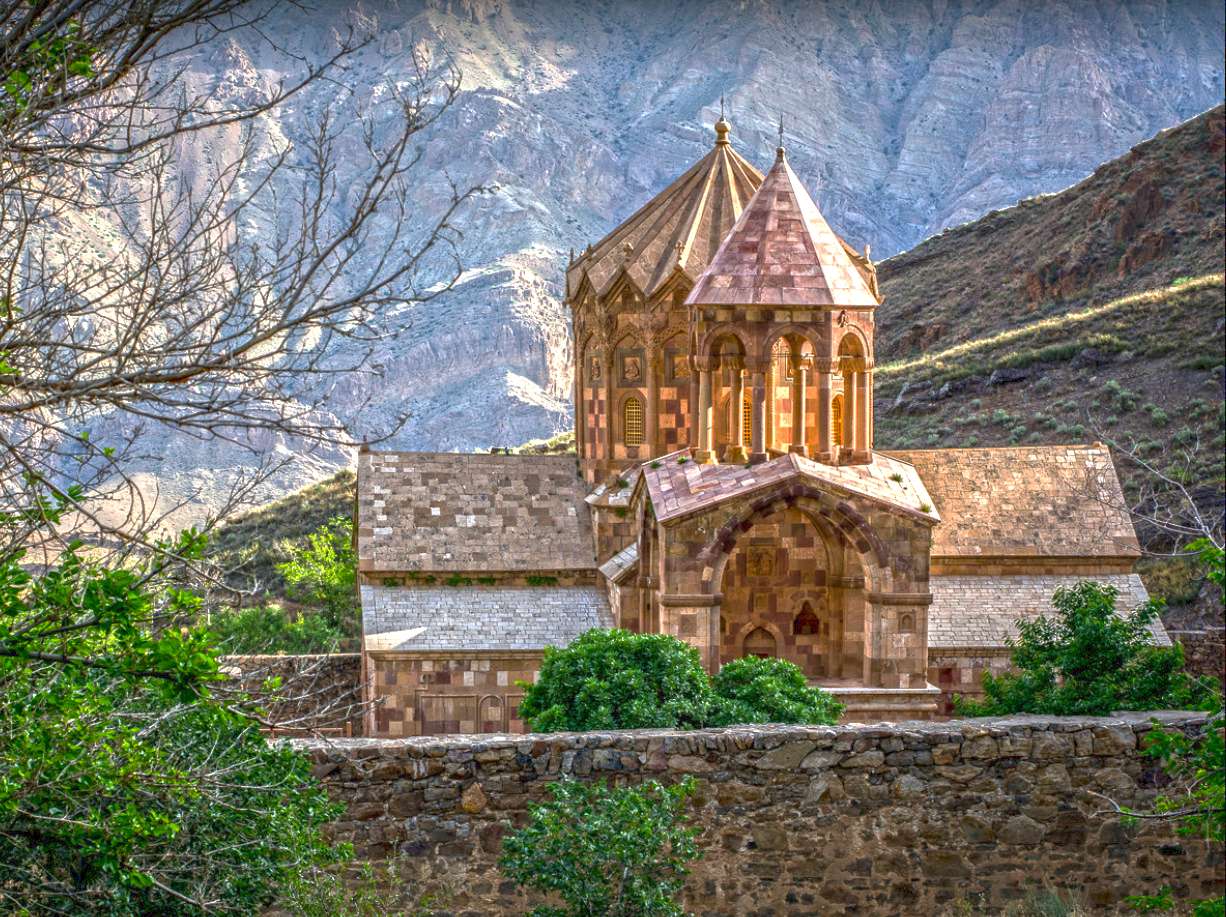 Nestled in the heart of the nature in the north-west of Iran, in Azerbaijan province, the UNESCO recognized Armenian Monastic Ensembles have claimed a strongly felt presence both in matter and spirit, for centuries on end. St. Stepanos Cathedral, as one of the three notable structures of this ensemble, is seated in the heart of the mountains in Maku region, six kilometers from the Araks River which borders Iran and Armenia. The remoteness of the Cathedral, its fortification and elaborate architecture resonate with the surrounding unspoiled nature.

The earliest accounts about the Cathedral date back to 649 AD. It has been named after Saint Stephan, reputed as the first martyr of Christianity. Therefore, many Christians make a pilgrimage to the Cathedral on December 26th, the day of Saint Stephan’s martyrdom. In addition to being a pilgrimage site, the Cathedral also used to serve as a cultural center where scientists, poets, authors, thinkers and calligraphers frequented and produced numerous valuable manuscripts. These works are now being kept in the treasury of the Republic of Armenia, in Yerevan and San Lazaro Degli Armeni, in Venice.

The Vank and its grounds cover an area of 3463 square meters. Its strong ramparts are interspersed with seven towers; one tower at each corner, one tower in the middle of the eastern rampart and two towers in the middle of the western ramparts on either side of the entrance gate, protecting the gate. The gate is located in a recess that has bent in the rampart for 8 meters. The two-panel wooden door is 5.1 meters wide and 5.2 meters high, covered with iron sheets. On both sides of the door two small stone platforms are installed. The columns behind these platforms rise into a pointed arch, above the entrance door. The front section of the arch hosts a picture of Mary holding Baby Jesus. The entrance is followed by a vestibule (hashti) proceeding to the courtyard with five crescent arches.

Greeting the visitors in the first courtyard is the magnificent structure of the Church itself which rises to the sky with an exquisitely decorated dome while it calls believers for prayer with the chiming bells of its adjoining three-floor bell tower. Located more to the south of the cathedral is the Caliphate and the cultural center of the cathedral. The cultural center used to enjoy a rich library containing manuscripts and illustrated books. Unfortunately, the library was set on fire during the tumultuous years of 1919-20. This section of the cathedral is 2250 square meters and comprised of a one-floor building which goes around the courtyard. Unfortunately some parts of this structure have been ruined over the years.

Located between the northern wall of the church and the northern rampart of the cathedral, there is a one-floor small church named Boghos and Bedros, also called Ojagh-e Danial. The exact reason behind this appellation is unclear; however, it can be attributed to a saint called Danial who was born in Syria in 410; he lived in austerity and passed away in a village in the vicinity of the Euphrates. The structure is a long, narrow room, 20 meters long and 6 meters wide, and consists of three sections; the altar in the eastern side, the gathering hall in the middle and the baptism font in the west. The structure is decorated with braided stone bands.

The design of the St. Stepanos Church, together with its elaborate decorations, are unparalleled among the churches of Iran, so much so that one can safely say that the cathedral captures the essence of spirituality in the Armenian Apostolic Church most exquisitely. The most eye-catching and elaborately designed part of the church is its hexadecagon (a polygon with 16 sides), 6 meters high conical dome. Braided chains of stone go all around the 16 sides of the dome creating 16 small pointed arches with the heads of two dragons carved at the bottom where the two adjoining bands come together, and one cherubim carved delicately on its top. Inside these arches, the portraits of Christian Saints and one of the Christ’s Apostles have been carved and installed in square pieces of stone. Eight windows have been installed around the dome, covered with religious motifs. The dome is also decorated with framed crosses, while small crosses grace the edges of the dome.

The entrance of the church is installed in its western wall, in a recess of about 1.40 meters. The black stone door of the church is surmounted by muqarnas arches replicating the entrance to the higher levels of the heavens. These arches seem uniform at first glance, but they were in fact created in pieces and assembled in the present form.

Some parts of the muqarnas decorations are carved with portraits of men, with or without beard and mustache. The founder of the church has left an inscription beside the door, pointing out his name as well as those of his next of kin. The inscription above the door recounts the dedication of Dare Sham village to the cathedral by Abbas Mirza, the Qajarid crown prince, in Armenian and Farsi. Around the pointed arch of the entrance and all around the building, cross-stones and inscriptions, that are equal in size to the building blocks of the structure, are installed. On both sides of the western entrance, there is an arched small recess that is bound and framed by chains of braided stone which go all around the building. On the very top of the wall, a relief representing Christ’s Crucifixion in the company of two of his apostles is carved in a frame.

The southern wall supports the bell tower that is attached to the main building of the church. On the lowest part of the wall, inside the tower, there is a relief depicting Jesus Christ’s Nativity. Unfortunately the faces of Baby Jesus and Mary have been destroyed.

The eastern wall supports the altar of the church. Light penetrates inside the altar thanks to a hollow cross that is carved and decorated masterfully in the center of the eastern wall. On the outside, the cross is outlined with braided bands of stone that create intricate patterns. It is encircled by pictures of an eagle clutching a sheep on the top right, a caw on the left, two fish below the picture of the cow and two lions on either side of the lowest part of the cross. Hacked on top of the eastern wall is a pattern of an eagle with its wings spread open while holding a sheep, along with carved patterns of flowers. The relief below this illustrates the stoning and death of Saint Stephan. Two prisms have been opened on this wall in order to allow light inside the adjoining rooms of the altar. The prisms are decorated with delicate muqarnas and geometrical patterns.

The northern wall hosts the relief of an eagle with spread wings, while two angles are standing beside it. Another relief on the wall depicts the scene of Jesus Christ’s ascension, while the two witnesses of his ascension are fleeing the scene; however, the patterns have been washed away due to the weather.

The church itself is based on a cross-shape plan of 13.90 meters length and 12.80 meters width, stretched from the west to east. The altar of the church is located on the eastern end, where it rises 1.10 meters above the ground and is separated from the nave with a row of fences. A marble stone table is located in the center of the altar, encircled with four columns that support the arch. The area above the altar is decorated with the patterns of angels, birds, flowers and arabesques. Every dawn bestows sunlight inside the church through the hollow shape of the cross carved behind the altar. Across the altar, on the western side of the church, two sets of stairways reach a balcony which is secured by fences.

In the nave, four columns of a dark colored stone are joined together two by two, making vaults and rising 10 meters above the ground at their highest. The church has also been used for baptizing children, and the baptism font used for this tradition is placed in the western wall. The prayer niches and corners for lighting candles, the high rising solemn walls and vaults of the church, all have witnessed congregations and religious ceremonies for generation after generation of believers and worshipers.

The best time to visit Saint Stepanos Monastery, located in a mountainous area near Aras River, is during the spring and summer
Saint Stepanos is open every day (except on the religious mourning days) from 8:00 AM to 5:40 PM.

Things To Do In Jolfa