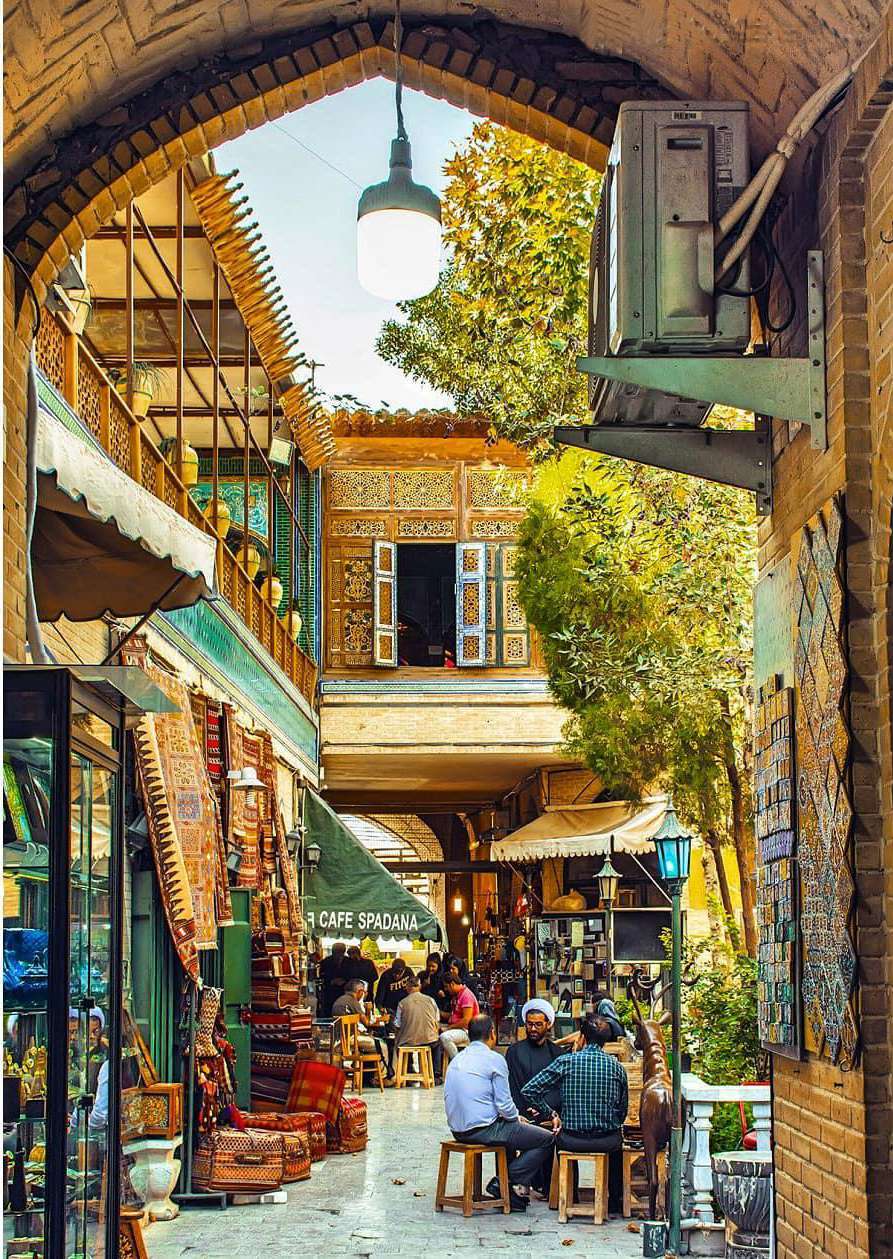 Walking along the atmospheric bazaar known as Qeysarieh Bazaar

Enjoying the intricate handicrafts in one of the most historical marketplaces in Isfahan.

Photos of the Grand Bazaar of Isfahan (Qeysarieh Bazaar) 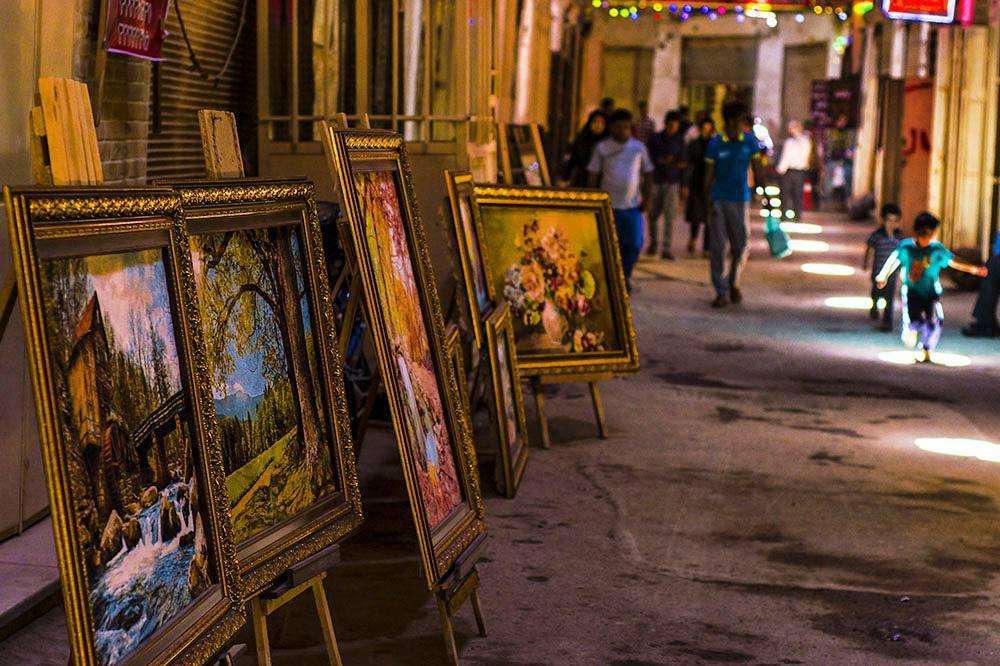 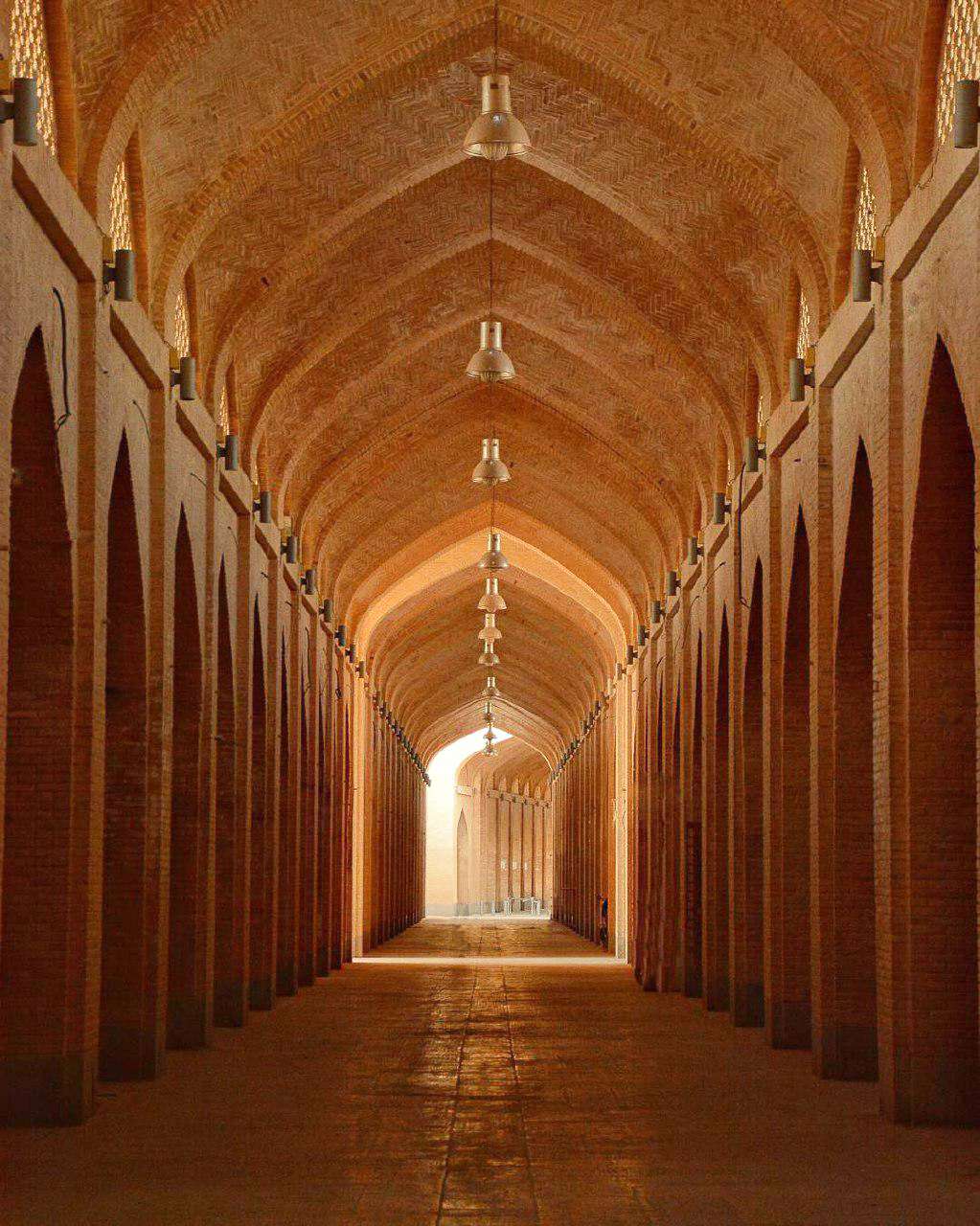 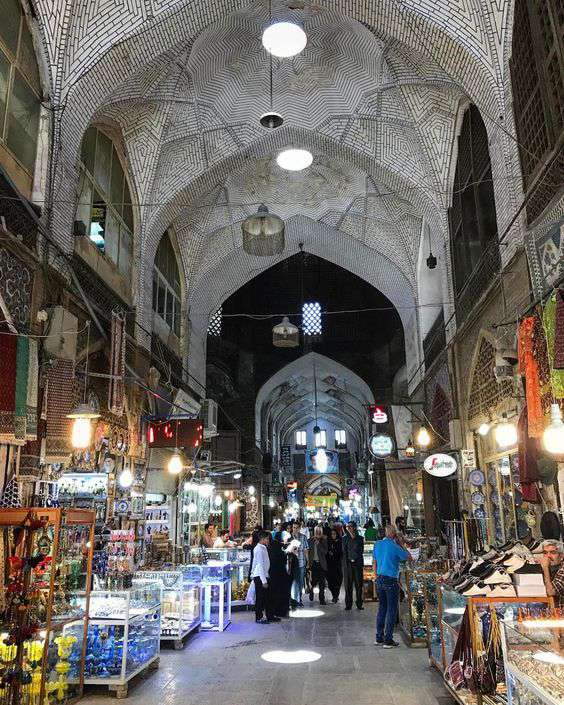 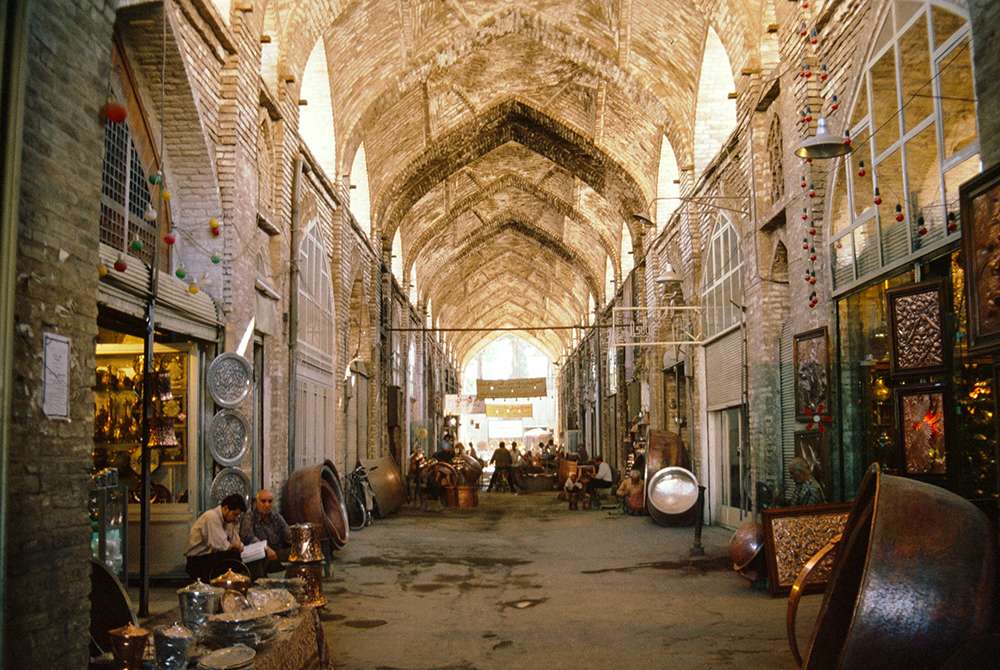 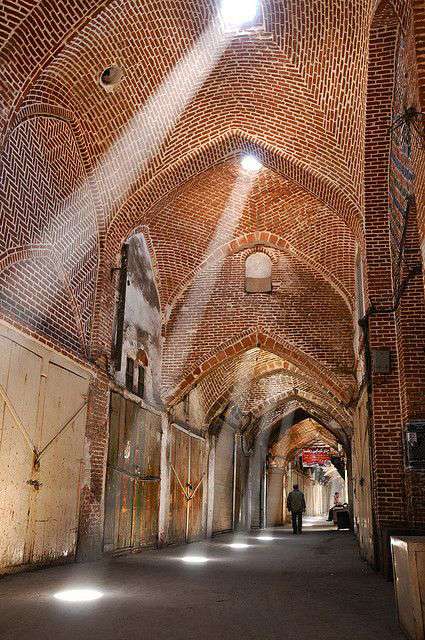 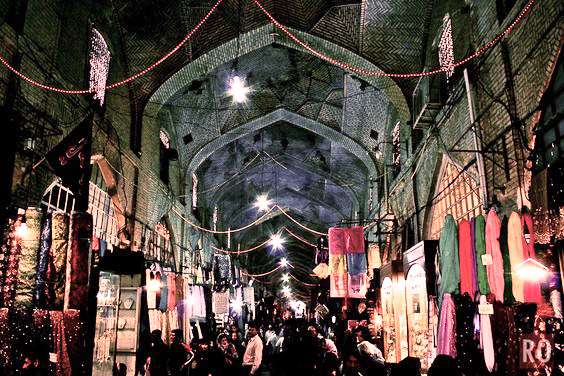 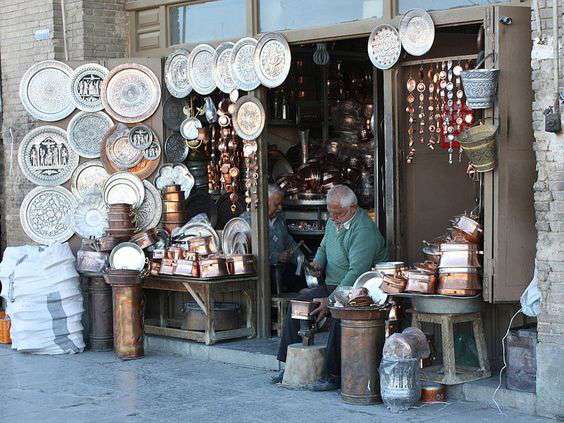 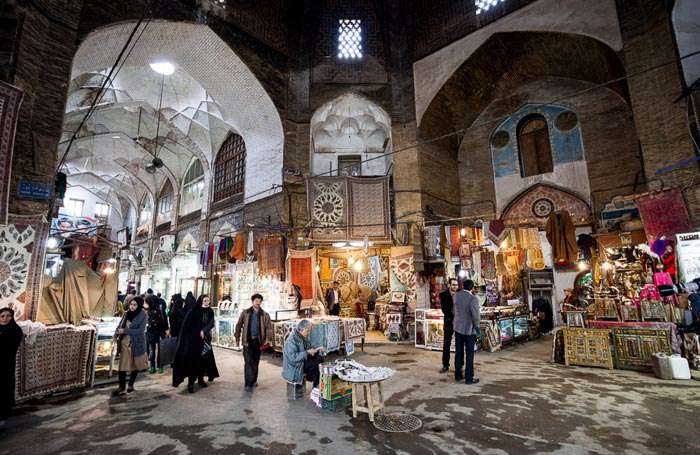 Grand Bazaar of Isfahan (Qeysarieh Bazaar) When you enter Grand Bazaar, also known as Qeysarieh Bazaar, you step into a treasure house of art. This Bazaar, like many other bazaars in Iran, is a roofed structure with high ceilings, and corridors with shops aligned on each side. In several spots, the corridors display spaces called Chaharsuq (crossroad), boasting high, well-decorated brick domes on the top. The royal Safavid bazaar, built in the early 17th century on the northern side of Naqsh-e Jahan, has been one of the most prosperous parts of bazaar since the very beginning of its construction. The first stone was laid in 1603 and along with the shops, some sarays, mosques, schools, and caravansaries were built in a linear structure. The caravansaries and their smaller versions, called timcheh, were independent structures with inner courtyards where caravans, with loaded camels and donkeys, could stop, unload and rest. You can enjoy the live gallery of handicrafts and also the Safavid and Qajar constructions, like Saray-e Golshan, Nimavar Theological School, Sadr School, and Timcheh Malek.

Timche, a small arcaded courtyard, is a Persian word meaning a roofed, commercial space in Bazaar, dedicated to a single type of business. Timche is of different types, based on its plan and the number of floors. Malek Timche is a two-storied roofed area built by Ibrahim Malek al Tojjar, a well-known Qajarid Merchant in 1904. Ibrahim Malek al Tojjar was a well-known philanthropist and sponsored the construction and restoration of several mosques and historical buildings in his time.

This construction consists of three main parts: timche, saray, and baharband (summer open spaces). You will first enter the main part, which is a two-storey structure with an octagonal-shaped plan. This part holds a pool and ten shops, decorated with three-door sash windows connected to the bazaar through an eastern corridor. The businessmen settled here according to their rank; the superior businessmen were on the first floor, the lower-level ones were on the second floor and, finally, the least prominent ones were in the barnyard. Also, Timche Malek used to lodge the Saadat library, and that is what made this timche different from the others. The library was filled with books, proving once again the important role of businessmen in provoking social and political ideas. This timche is not usually filled with people and you can sit next to the pool and keep quiet for a while.

Isfahan, having one-third of the world’s handicrafts, and so designated as the second city of handicrafts in the world, possesses a distinct cultural identity. The rich art in Isfahan, representing the delicacy of Iranian spirit, is mostly decorative, rooted in its old traditions. During the Safavid’s reign, Isfahan was at the pinnacle of its art history. The Safavid art has a more unified development than any other period of Persian art. Shah Abbas was a great admirer of art and gathered many artists and craftsmen in Isfahan. Also, he increased carpet and textile production, with the purpose of making great economic benefits. More than 195 types of handicrafts are produced in Isfahan, all closely associated with the Iranian’s mode of life. Isfahan managed to receive 104 UNESCO awards of excellence for handicrafts, meeting several criteria such as reflecting the cultural identity, the innovative combination of traditional and modern materials and the environment-friendly process of production. The artisans of Isfahan have gained 345 national awards of excellence in Iran. The velvet weaving and Brocade are in the tentative list of the intangible cultural heritage of UNESCO.

Carpet-weaving is undoubtedly one of the most distinguished manifestations of Persian culture and art, and among the first artistic handicrafts which have been produced since ancient times in Persia. Depending on the region, Persian carpets are decorated with diverse motifs, some inspired by Persian gardens with exquisite natural dyes, while others taking the form of medallions, arabesques and geometric patterns, world-known for their quality and artistic splendor. The Persian carpet embraces a wide range of materials and methods of knotting. Here, in this bazaar, you can visit the best carpet shops in Isfahan. Isfahan is the most famous city in Calico, a stamping design with inked wooden pattern blocks, the favorite handicraft in the Bazaar of Isfahan since the 19th century.  This art dates back to the Safavid era, which has undergone several stages of evolution giving rise to different patterns such as arabesque, geometrical shapes, hunting scene etc. and different productions such as tablecloths, curtains, and bedspreads.

Minakari (Enamel) is the delicate art of painting and coloring on the metal, which has its roots in the Seljuk era and flourished in the Safavid era. Persian Miniature is one of the earliest arts (between 7th to 10th century), depicting the Iranian history which has always prided its mythological heroes and literary plots. This art is a combination of metalwork and miniature. You can find very detailed, fine miniatures on the objects produced as minakari, especially the scene of polo matches held in Naqsh-e Jahan square.

Engraving on metal is one of the oldest handicrafts in Iran, dating back to 5000 to 7000 years ago. Isfahan is the main center for engraving, with numerous patterns depicting hunting scenes, fictional birds, animals and etc. You can walk through this Bazaar while listening to the clamor of this art, caused by the movement of the engraver’s hand and the harmonized shocks of the hammer. It is an old tradition that newly married couples buy silver engraved candelabras and mirrors before they start their new life!

The shops are closed on Fridays and national holidays (religious mourning days).